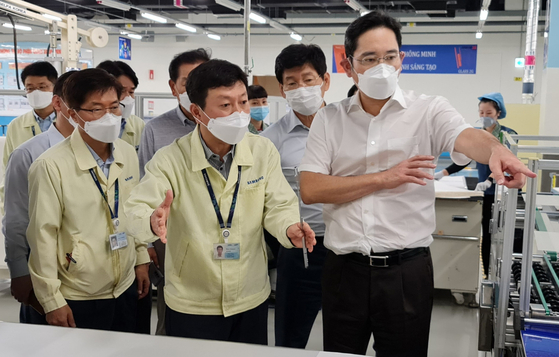 
Samsung’s leader Lee Jae-yong will be placed under probation after he is released on parole this week, the Ministry of Justice announced Wednesday.

Probation review committees nationwide on Wednesday conducted screenings of 810 prisoners who will be released on parole on Friday, including Samsung Electronics Vice Chairman Lee, to decide whether they should be placed under probation or not. The Suwon Probation Review Committee, which oversees the Seoul Detention Center where Lee is currently being held, considered the tycoon’s case.

In Korea, a parolee is placed under probation when he or she is released from prison, according to the Criminal Act and Act on Probation.

According to the law, a parolee under probation must adhere to a few additional conditions. They submit to the supervision of his or her parole officer. They also need to keep their own residence and find a job, but are banned from befriending people who may commit crime.

A parolee under probation is also required to notify the law enforcement authorities in advance about residential relocation or travel for more than a month, including oversea trips.

Not all parolees are placed under probation if the Justice Ministry decides there is no need. Over the past few years, some older parolees were given exemptions.

Earlier this week, a nine-member board chaired by Vice Minister of Justice Kang Sung-kook decided to release Lee and 809 other prisoners ahead of Liberation Day on Aug. 15. Justice Minister Park Beom-kye subsequently approved the decisions.

Lee is in jail for bribing former President Park Geun-hye during her presidency in return for political favors. As of the end of July, Lee completed 60 percent of his term, with less than 13 months left in a sentence of two and a half years.

His sentence is scheduled to end in July 2022, and Lee will complete his term beyond the prison walls as a parolee under probation.

Even though Lee will be under probation, he can still obtain permission from the government to make an overseas business trip.

Lee is also under strict working restrictions. As per the law governing special economic crimes, the Ministry of Justice imposed a five-year employment restriction on Lee in February, after his sentence was finalized in January. The restriction effectively bars Lee from working for Samsung Group.

Article 14 of the Act on the Aggravated Punishment of Specific Economic Crimes bars those convicted of embezzlement or a breach of trust involving more than 500 million won ($435,000) from working at companies closely related to the criminal activities.

The five-year restriction starts in July 2022, when Lee’s sentence formally ends. As such, Lee won’t be able to return to Samsung management until the second half of 2027.

The justice minister has the power to lift the restriction, but Minister Park said Tuesday that he has no plan to do so.