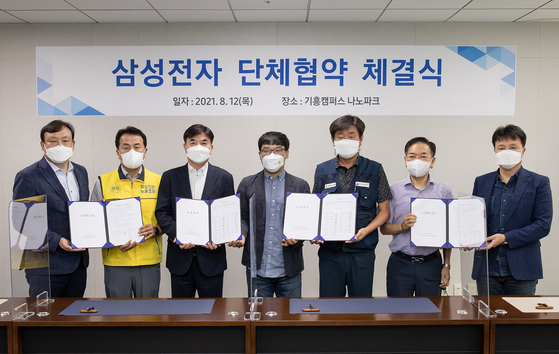 Samsung Electronics reached a collective bargaining agreement with labor unions for the first time in its 52-year history.


The company and the unions have held 30 meetings since last November and came to their first tentative agreement on July 30.


“Today is a very meaningful day when Samsung Electronics signs its first collective agreement,” said Kim of Samsung Electronics. “We hope labor and management will step forward into a constructive future together through sincere communication and cooperation."


“Samsung will never be called non-union from now on,” Lee said. “We will strictly comply with labor laws and ensure the three rights of labor.”


Samsung founder Lee Byung-chull declared that “there will be no labor union even if you throw dirt in my eyes."

The company’s key managers invited experts on labor issues to change the company’s attitude towards unions. Samsung Electronics also declared for the first time that labor unions and a joint labor-management conference would be the communicative channel between employees and the company in a management report published earlier this year.


Despite the agreement’s significance, major growing pains are expected. The company has no experience in dealing with labor unions.


“Samsung companies have been ignoring the constant demand from labor unions to come to the bargaining table for salaries,” said the Federation of Korean Trade Unions in a statement on Aug. 9. “They have been ignoring the request until now, and they are trying to appease the unions with small things when there’s a big issue in the company, such as Lee Jae-yong being released on parole.”


Lee will be released on parole on Friday and placed under probation.

“Samsung’s labor-management culture has not followed the change in time,” Lee said. “We will endeavor to bring about a new culture built on the harmony and coexistence of labor and management.”