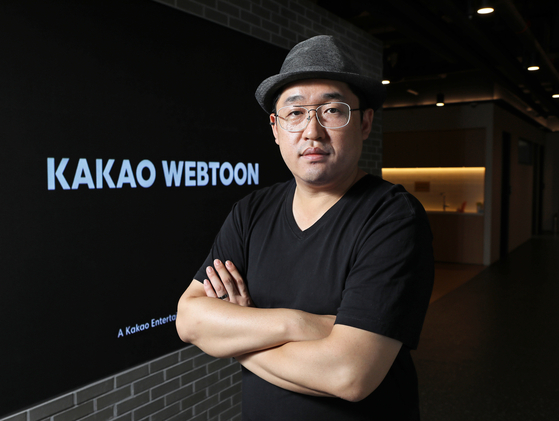 Park Jeong-seo, the CEO of Kakao Webtoon Studio, poses for photos after an interview with the Korea JoongAng Daily at the company's office in Pangyo, Gyeonggi, on Aug. 11. [PARK SANG-MOON]

Fans of the TV drama then moved over to Daum Webtoon to read the original “Itaewon Class.” They also bought merchandise related to the webtoon at shops.

Seeing the silo-busting possibilities of webtoons, Daum Webtoon rebranded and became Kakao Webtoon on Aug. 1. It wants to repeat the success of “Itaewon Class” globally.

“The keyword to the renovation is ‘global,’” said Park Jeong-seo, CEO of Kakao Webtoon Studio during an interview with the Korea JoongAng Daily on Aug. 11. “We don’t use expressions like ‘K-webtoons,’ because we believe that such terminology actually limits our potential.”

The new app that accompanied the rebranding hit 1 billion won ($864,000) in sales in just two days after release in Korea. The app will soon launch in Europe and North America. It is already in Thailand and Taiwan.

“Kakao views webtoons as having the biggest potential in the global market, and we plan to make it bloom,” Park added.

The company already has a good idea of how to localize its business in overseas markets.


“We’ve been witnessing the success of Piccoma during the past two years, and that’s given us insight into localization,” Park said, referring to the Kakao Japan’s webtoon company.

The new app has been programmed in a way that will make the localization process as swift as possible with a method called “one-build,” which allows the app to be patched easily to different languages and networks with only minimal changes.

Kakao Webtoon Studio aims to create an ecosystem of web content creators and support them in making stories powerful enough to become the next Marvel superhero franchises.

Daum started offering webtoons in August 2002 and formed Daum Webtoon in 2015. It became a subsidiary of Kakao in 2016 specialized in distributing webtoons and creating secondary products from the stories, such as films, dramas and games.

Park joined Daum as a news editor in 2006. He began working in the webtoon team – which had two members including Park – simply because he liked comic books and the company needed someone to take care of the web comics service. Ten years later, he became the CEO of Daum Webtoon. 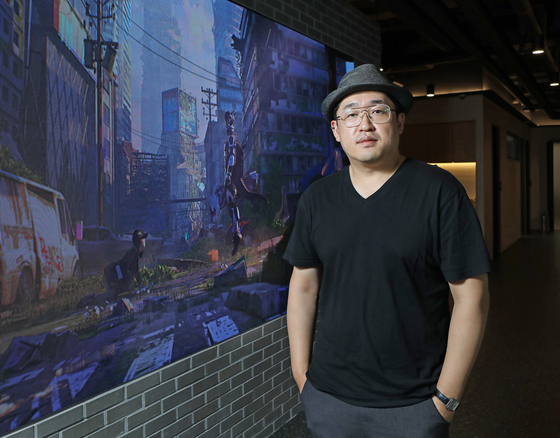 Park Jeong-seo, the CEO of Kakao Webtoon Studio, poses for photos after an interview with the Korea JoongAng Daily at the company's office in Pangyo, Gyeonggi, on Aug. 11. Behind Park is an introductory video of Kakao Webtoon's new launch playing on a screen. [PARK SANG-MOON]


Q. How do you plan on creating the next Marvel franchise?

A. The scariest thing about the Marvel franchise is that it comes in this massive wave of content. It comes in all forms – drama, animation, games, merchandising and much more. That happened with “Star Wars” and so on. But Korea has not been able to make such influential content yet.

The way to go about making that happen, I believe, is by having a collective creation system. We need a group of creators to come together to create a story then make it into other content. There needs to be an organic connection between people from different fields, and that’s what we’re aiming for.

It’s not just about the scale of a story. There needs to be unity in the universe that the story builds, but the people – whether that be the drama director or the film scriptwriter – need to actively communicate with each other and share their creative ideas. We have that system at Kakao Webtoon Studio, but if we can take it further, then I think a powerful story can be born.

Which stories are popular abroad?

What has to come first is to make it popular in Korea. That comes before any localization efforts. We’ve learned that our content is our biggest asset in launching globally, so we’ve combined the stories we have on Daum Webtoon and Kakao Page to introduce more stories on Kakao Webtoon.

How else is Kakao Webtoon optimal for launching overseas?

That is in the technical side of the new app. There’s a method called one-build, which allows the app to be customized easily for the different markets with just tiny tweaks in the language setting.

Another major focus for us is translation. When we launch our service in a different country, it’s always the case that there will be pirate copies. What we can offer as the official copyright holder is high-quality translation that people will immediately feel is better than the illegal copies.

We invest hugely in translation and making the webtoon fit the local trend. 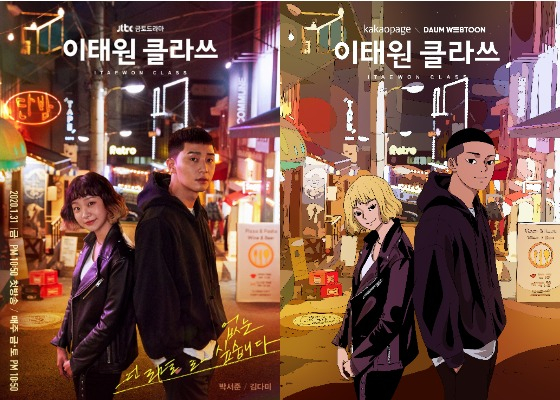 The posters for "Itaewon Class" drama series that aired in 2020, left, and the original webtoon series, right [JTBC, DAUM WEBTOON]


When did the idea for the renewal come about?

It was about two and a half years ago, when “Itaewon Class” was a huge hit. We’ve been selling our works in a similar way for so long, but the popularity of the drama remake was what made us realize that we need to sell our content differently.

People who are not familiar with webtoons don’t approach the works by clicking on the webtoon service page or downloading the app. They search for “Itaewon Class” on portal sites and then go straight to the episodes.

The problem is when they’re done reading “Itaewon Class.” They’re completely lost because they don’t know how to navigate through the platform or where to look. In order for them to look at other works, they had to go back to the main service page then click their way into other works.

If you compared that to a book store, it would be like being required to start from the door and walk up to the different aisle each time you wanted to pick up a different book, instead of picking a nearby book up from here and there.

So we’ve come up with a way where readers don’t have to go back to the main service page every time they finish a work, but get recommended different works from where they stand.

With so many webtoons being created, is quality control becoming hard work?

Actually, no. Webtoons have overall become higher in quality. Creators have come to understand what readers like or don't like, and the fierce competition among webtoonists brings the bar even higher.

The creative process has become much more complicated too. There are still webtoonists who prefer to do all the drawing and story writing by themselves, but it's often the case that there's a story writer, an illustrator, a colorist, a storyboard writer, a background painter and so on. This is also proof that the market is getting big enough to sustain the bigger number of people working in the field.

Some people criticize popular webtoons for being similar to each other, like fantasy romances that start off with the main character reincarnating with knowledge from their past life. But every content market has its trend. It's in music, films and dramas. If there's one popular item, others will follow.

But that also comes with efforts from creators to differentiate themselves in ways they can. That eventually leads to diversity and something novel that takes the lead.

What’s the goal for Kakao Webtoon?

This year, it’s about settling down in overseas markets. We’ve made it in Thailand and Taiwan. We knew that the launch in Korea would be the toughest, but even that’s been done well. We’ve got stable results and we’re going to take that experience to go elsewhere.

By the end of this year, we’ll be knocking on the doors of European and North American regions.

Next year will be the true beginning of Kakao Webtoon’s growth. This year is about establishing the platform and marketing through different strategies. Next year, the company will really get to leap as a global entertainment company.