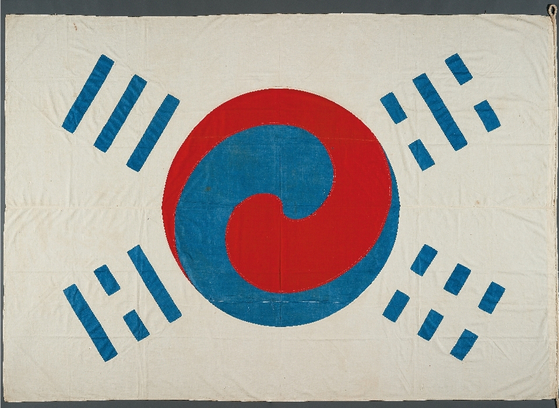 The Denny Taegeukgi, the oldest and largest remaining prototype of Korea’s national flag, is presumed to have been created in 1890. It was presented the following year by Joseon King Gojong (1863-1907) to Owen Denny, an American consul. [CULTURAL HERITAGE ADMINISTRATION] 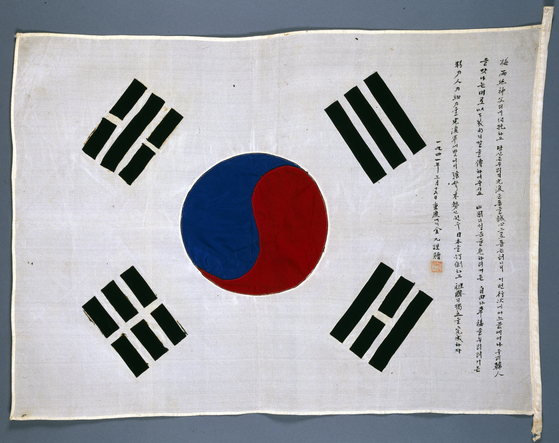 A Taegeukgi signed by freedom fighter Kim Gu (1876-1949) has Kim's handwritten text on the right of the flag describing his desire for Korean independence. [CULTURAL HERITAGE ADMINISTRATION] 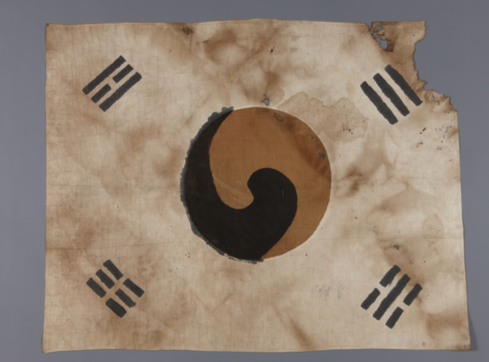 The Taegeukgi of the Gwangbokgun, or Korean Liberation Army, was discovered during the renovation of an annex of Jingwansa, a centuries-old Buddhist temple in northern Seoul in 2009. It is presumed to have been created in 1919. [CULTURAL HERITAGE ADMINISTRATION]


The Cultural Heritage Administration (CHA) announced Thursday it is designating three historically significant Taegeukgi, or Korean national flags, as treasures. They are the Denny Taegeukgi, a Taegeukgi signed by Kim Gu (1876-1949), and the Taegeukgi of the Gwangbokgun, or Korean Liberation Army. The announcement came about a month prior to the official designation, which will be formalized during next month's Cultural Properties Committee meeting.

CHA said it was happy to make the announcement just before the country celebrates its 76th Liberation Day on Aug. 15.

The three flags were produced in the 19th and 20th centuries and are “regarded as cultural assets that contain the aspiration for independence and the earnest desire to preserve the identity of Koreans during the harsh ordeal of the Japanese colonial period (1910-45),” said CHA. [CULTURAL HERITAGE ADMINISTRATION]