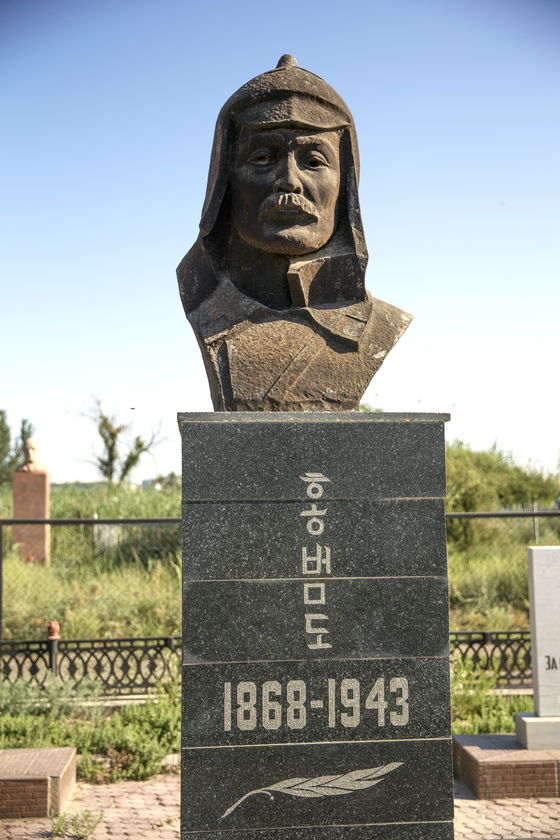 Korean independence fighter Hong Beom-do will be will be repatriated to Korea on Sunday, ahead of Kazakh President Kassym-Jomart Tokayev's state visit to Seoul next Monday and Tuesday for a summit with President Moon Jae-in. Hong’s bust is pictured in a cemetery in Kyzylorda, Kazakhstan, and a Korean delegation will fly to the country Saturday to bring him home to be buried at a national cemetery in Daejeon Wednesday. [YONHAP]


Kazakhstan’s President Kassym-Jomart Tokayev is expected to make a two-day state visit to Korea early next week for a summit with President Moon Jae-in, the Blue House said Thursday, coinciding with the repatriation of the remains of a revered Korean independence fighter from the Central Asian country.

Tokayev will be the first foreign leader to make a state visit to Korea since the beginning of the Covid-19 pandemic last year.

Kazakhstan is Korea’s largest trading partner and investment destination in Central Asia, according to Park, and a key partner in promoting the New Northern Policy, the Moon administration’s initiative to establish stronger economic cooperation with the Russian Far East, Northeast Asia and Eurasia.

The two sides will discuss ways to expand substantive bilateral cooperation in areas such as transportation, infrastructure, construction, ICT, health care and the environment, she added.

Coinciding with the visit, Kazakhstan will also be repatriating Gen. Hong Beom-do (1868-1943), a commander of the Korean Independence Army during Japan's 1910-45 colonial rule.

Hong is especially known for his heroics leading the Korean independence troops to victory in the Battle of Fengwudong against Japanese forces in Manchuria, currently located in Jilin Province in northeastern China, in June 1920. He died in Kazakhstan in October 1943. He was buried at a cemetery in Kyzylorda, Kazakhstan.

President Moon in his address on March 1, 2020, marking the anniversary of the March First Independence Movement described the Battle of Fengwudong led by Gen. Hong as “the first great victory of the war of independence” against Japan.

Moon plans to send a special delegation led by Korean Minister of Patriot and Veterans Affairs Hwang Ki-chul to Kazakhstan Saturday to bring Hong’s remains back to Korea, said Park. Hong’s body is expected to be repatriated on Sunday, Liberation Day, which marks the 76th anniversary of Korea’s independence from Japanese colonial rule with the end of World War II.

His remains will be buried at the Daejeon National Cemetery next Wednesday following an official mourning period.

Tokayev will be reciprocating Moon's state visit to Kazakhstan in April 2019.

His state visit to Korea had initially been expected for March last year but was postponed due to the coronavirus situation.

During the summit, the two leaders are also expected to discuss expanding cultural and people-to-people exchanges and strengthening partnerships on regional and global issues.

Korea will celebrate its 30th anniversary of diplomatic ties with Kazakhstan next year.

A Kazhak president last traveled to Korea five years ago in 2016.