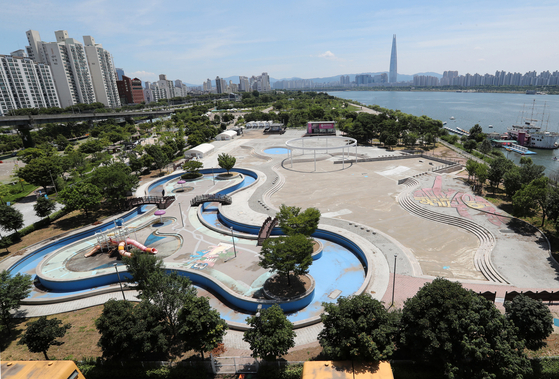 The Han River has long been a resting place for the people of Seoul. Especially in the sweltering summer, it used to be crowded with people swimming in the river. According to the “Leisure Life of the Residents of Gyeongseong Province during the Japanese Occupation,” published by the Seoul Historiography Institute, the footbridge, Ddukseom and Seobinggo swimming polls around the Han River were popular summer destinations, visited by 20,000 to 30,000 people each year.

In the 1980s, the Han River was extensively renovated as a result of the comprehensive development plan. Sports facilities, rest areas and cruise ship marinas were built. It was around this time that today’s concrete swimming pools were built. Starting with the Jamwon Swimming Pool in 1989, swimming pools and waterparks were constructed. Currently, there are five pools in the Han River Park in Ddukseom, Yeouido, Gwangnaru, Mangwon and Jamsil, and two waterparks in Nanji and Yanghwa.

According to the Han River Management Headquarters of the Seoul Metropolitan City, nearly 40,000 people visit the swimming pools every year. The Han River Park swimming pools often appear on television during heatwaves. People swimming in the pool in the sizzling heat gives a vicarious sense of satisfaction for to viewers. But the scene has disappeared for two years now. The swimming pools have not opened due to the Covid-19 pandemic.

Meanwhile, the swimming pool in the Jamsil Han River Park will begin construction later this month to refurbish the old facilities built in 1990 into a nature-friendly waterpark. It was not a decision made because of the closure, but was a planned project. The river management headquarters made the renovation plan last year and chose “Wonderful Land — Land of Fantasy and Marvelous Space,” the winner of the design competition.

The city explained that when construction is complete, it will be a multi-purpose leisure space for all seasons, in addition to swimming in the summer. The 4,450-square-meter (47,899-square-feet) “Wonder Pool” will have an infinity wall in the direction of the river, allowing swimmers to feel like they are swimming in the river. It sounds like a dream as we are living with the pandemic. But I hope things will be different next year. I hope the dry swimming pools will be filled with both water and people.