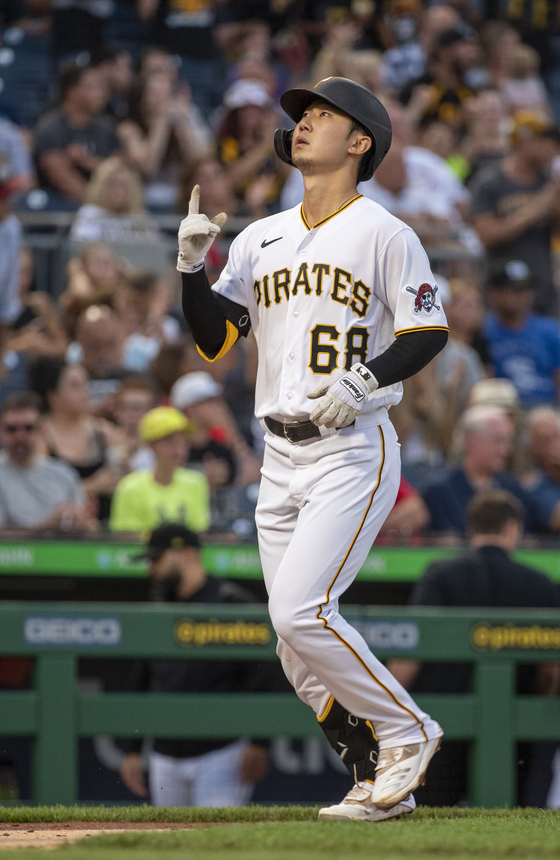 Pittsburgh Pirates' Park Hoy-jun celebrates after hitting a home run against the St. Louis Cardinals during the fourth inning of a baseball game on Tuesday. [AP/YONHAP]


Park Hoy-jun of the Pittsburgh Pirates is now 10 games into his fledgling major league career and things are looking good, with a home run and a .281 batting average suggesting he is off to a better start than former high school teammate and MLB rival Kim Ha-seong.


Park became the 25th Korean player to debut in the majors on July 16, appearing as a pinch hitter for the New York Yankees in a 4-0 loss to the Boston Red Sox at Yankee Stadium in New York. A few days later he was traded for the Pirates, where he immediately became a starting lineup regular from the beginning of August.

Park's sole game with the Yankees was a fairly inauspicious outing — one at-bat, one pitch, one grounder to first base and one out — but since moving to the Pirates, the 25-year-old has started to look a lot more comfortable.

Park's first major league hit came in his first game with the Pirates, a double to right field in the seventh that allowed him to come home on a sac fly two batters later. Since then, the shortstop has racked up eight more hits in eight more games, giving him a .321 batting average for the month of August.

Of those nine hits this month, four of them were for extra bases including a solo home run on Tuesday this week. Since Aug. 3, Park has been batting leadoff, taking the important spot after just one game with the Pirates.

Park's rapid assimilation into the Pirates squad isn't a huge surprise. Unlike many other Koreans playing in the big leagues, Park did not transfer to the United States after building a career in the KBO. Instead, Park staked his whole career on the majors.

Park has been playing in the United States since 2015, working his way up through the New York Yankees system before making it to Triple-A for the first time this season.

Typically an infielder, Park graduated from Yatap High School in Seongnam, Gyeonggi, a year behind Kim of the San Diego Padres. The two played alongside each other in high school, with Park ultimately taking over from Kim at shortstop. 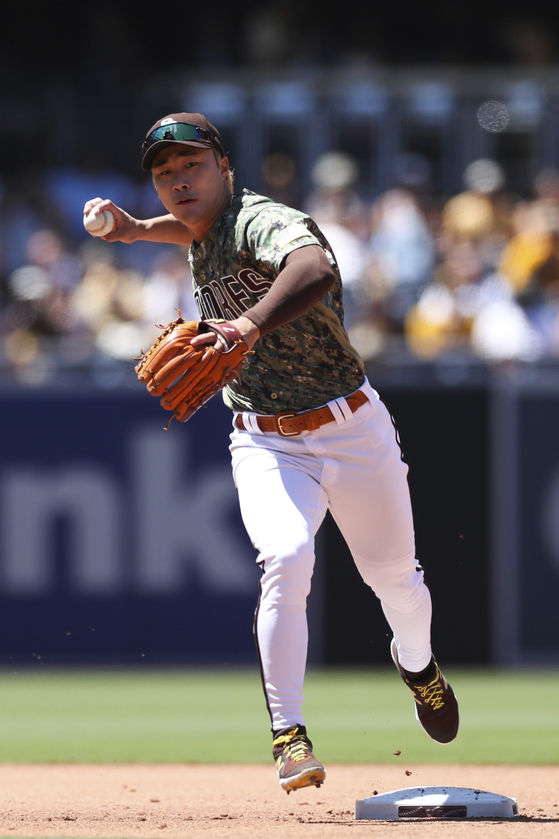 San Diego Padres shortstop Kim Ha-Seong throws out Colorado Rockies' Connor Joe at first base in the fourth inning of a baseball game on Sunday. [AP/YONHAP]


Kim joined the KBO in 2014 and spent seven years playing for the Kiwoom Heroes, twice winning the Golden Glove award and quickly emerging as one of the most reliable bats in the league. He signed with the Padres in December last year and debuted with the team on April 1, but has struggled to find his feet.

With 214 at-bats to his name so far this season, Kim has a .210 batting average with 45 hits and six home runs. Over his first 10 games of the season, which is theoretically equivalent to where Park is now, Kim had five hits with a .185 batting average.

Kim has shown clear signs of improvement in recent months — after struggling in April and May his numbers jumped up in June, before trailing back off again in July. In August so far, Kim is looking more comfortable, but is generally only called on as a pinch hitter and rarely gets the opportunity to start.

Park's more confident start to his big league career is likely due to his experience in the minor leagues, where he will have faced the same style of pitching, played with the same ball and experienced similar coaching to the majors.

That decision to work his way up the U.S. system appears to be paying off for Park now, although he'll need a lot more games under his belt before it's really clear what kind of player he is going to be.