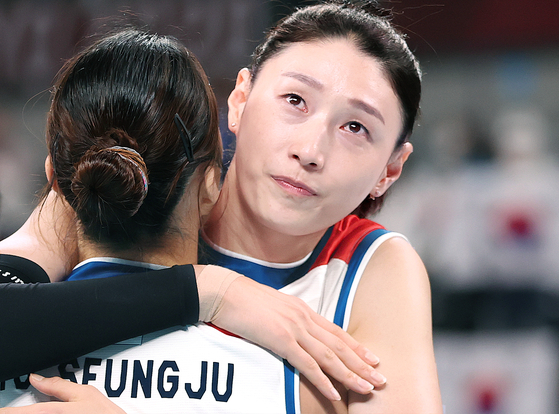 Kim Yeon-koung hugs Pyo Seung-ju after the Korean volleyball team was defeated by Serbia in the bronze medal match at Ariake Arena in Tokyo on Sunday. [YONHAP]


After nearly two decades in a Korean jersey, Kim Yeon-koung officially retired from the national volleyball team on Thursday evening.

“I am saddened to think that this is really the end,” Kim said. “Being part of the national team was a meaningful part of my life, and I was really happy. I am grateful to all of the coaches, staff members and the national team players that I worked with. I would not have been here if it were not for them.

“I won’t be on the court anymore, but I trust that the team will do well. I will always send my support.”

Kim dedicated the best part of 20 years to the Korean national team, rising through the ranks from an exceptionally talented high school student to a seasoned veteran and the talismanic captain of the squad.

She first wore the Taeguk mark in 2004 at the Asian Junior Women’s Volleyball Championship. Then, in 2005, when she was still a student at Suwon Hanil Girls High School, Kim was called up for her first senior match at the FIVB Volleyball World Grand Champions Cup.


The rest is history. Kim has appeared at three Olympics, four Asian Games and three World Championships with the national team, captaining it throughout many of those tournaments.

Away from international events, it quickly became clear that Kim may be the greatest volleyball player Korea has ever produced, and her career took her to play in far more competitive leagues in China and Turkey. The more she learned playing for high-powered teams around the world, the more Kim brought back to the Korean volleyball team.

“I wish that Kim would play a bit more for us, but I respect her decision to retire,” said Oh. “Kim has done so much for the national team for the past 17 years. I am grateful as the chairman of the Korean volleyball association and a retired volleyball athlete myself.

“I consider myself lucky to have met such a great player as chairman and I support her personal career moving forward.”