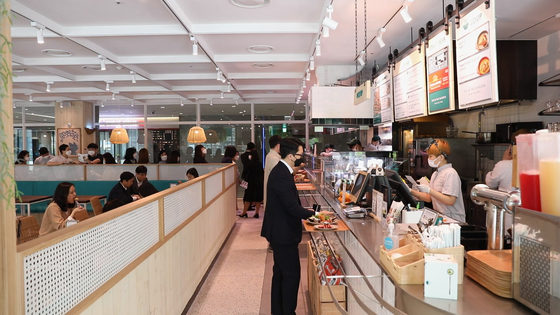 
The popularity of salad as a one-and-done meal is rising in Korea, with its market value surpassing 1 trillion won ($855 million) last year.

Salad was once only regarded as a side dish that people would eat with a main dish. But an increasing number of people, especially from the younger generations, are choosing to eat salads as their main dish as the demand for healthy food grows.

“I eat too many carbohydrates if I have a full meal,” said 33-year-old office worker Baek Ji-hyun. “I like how I can [naturally] get my intake of vitamins and fiber if I have a salad for my meal every day.”

More than 20 percent of people said they started buying more salads following the Covid-19 outbreak, according a survey conducted by the Korea Agro-Fisheries & Food Trade Corporation.

Responding to this demand, food companies are opening salad restaurants, and restaurants are investing more resources toward developing different styles of salads.

“We haven’t seen a single store shut down after 2019, even during the Covid-19 crisis,” said a Salady spokesperson. “We opened more than 90 new stores this year.”

The market for fruits and salads reached 1.14 trillion won last year, up 21 percent on year from 936.9 billion won in 2019, according to data by Korea Rural Economic Institute (KREI). 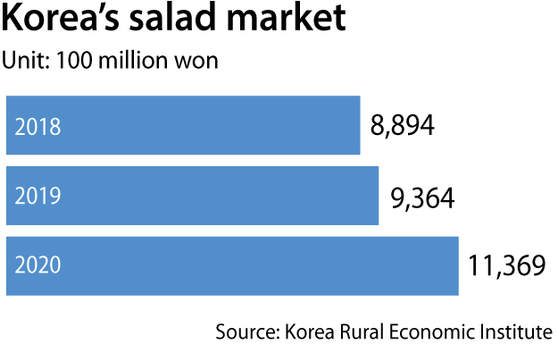 “The use of vegetables by restaurants and food distributors is rising rapidly, in line with consumers’ growing pursuit for health and convenience,” said Kim Sang-hyo, a KREI spokesperson.

Ingredients used in these salads are becoming more diverse as the market grows.

Salads used to consist of mostly just vegetables and maybe some fruit, without many other additions.

Salads these days have become more premium and can be found featuring diverse ingredients ranging from different types of cheese, such as ricotta and burrata, nuts, beans, chicken, salmon and more.

Pig in the Garden rolled out its shrimp corn salad and a salad that contains noodles made out of tofu for its summer specials.

“I didn’t think eating just vegetables would be enough for a meal,” said Kim Jeong-hun, a 45-year-old office worker. “But I started to try salads when I went out to eat with my younger colleagues, and began to think that salads could be considered a meal since they also may come with bread, meat and corn” along with the other typical vegetables.

Restaurants specializing in other foods are also investing more toward developing premium salad items on the menu.

“Salad is normally categorized as an appetizer, but demand grows every year, and customers want more diverse types of salads,” said a chef at Mad for Garlic, an Italian restaurant franchise. “We are putting as much effort into developing salads as main dishes.”

Huons leads the way in the health supplement market