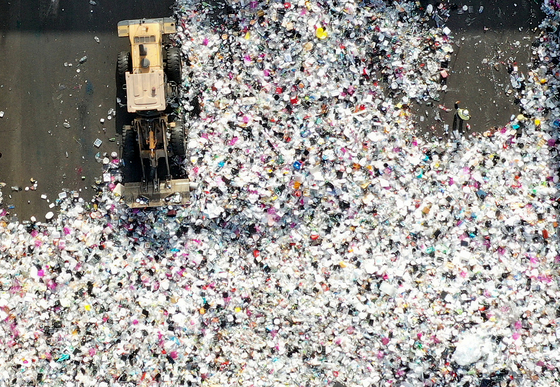 Plastic wastes are piled up at a recycling center in Suwon, Gyeonggi in January 2021. [NEWS1]

Korea chemical companies are rushing to develop plastic recycling technology as part of their ongoing attempts to shift to more environmentally-friendly businesses.

Plastic, in the past, used to be recycled mechanically, with collected plastic waste shredded, melted and remolded to make new items. This method, however, leads to degradation in quality, ultimately resulting in unrecyclable waste.

That is where the chemical recycling method comes in. Chemical recycling, although still at its infant stage, breaks down plastic to the molecular level, and then reforms it into a new product without the degradation that occurs from melting and remolding. This process ultimately leads to a much higher rate of plastic recycling.

Recycling plastic is crucial in protecting the environment because it takes up to 450 years to decompose on its own, according to the National Oceanic and Atmospheric Administration, making it a major source of pollution.

Korean petrochemical companies are competitively stacking up partnerships and investments to take a lead in the fledgling yet necessary business.

“PP-based plastic is a challenging material to recycle because it is mixed with other materials and additives,” said an SK Global Chemical spokesman.

“PureCycle has patented technology that separates pure PP from contaminants and colors. It enables what was unrecyclable in the past such as contaminated food containers, colored containers and plastic interior material for cars to be recyclable again. Those items used to be dumped in landfills or incinerated”

The two companies will form a joint venture to start building recycling facilities in 2022 in Korea and start operation by 2025. SK Global Chemical expects some 50,000 tons of PP-based plastic wastes to be reformed into new plastic.

This is just the latest in a slew of efforts the chemical company has been making to reform its plastic-manufacturing business into something more environmentally friendly.

It signed a memorandum of understanding with waste solution company Brightmark in January to commercialize the U.S.-based company's technology that breaks down plastics using extremely high heat.

In June, SK Global Chemical also acquired 10 percent at $56.5 million of Canada-based Loop Industries, which specializes in breaking down what was previously unrecyclable polyethylene terephthalate (PET).

SK Global Chemical, a wholly owned subsidiary of petrochemical giant SK Innovation, said it will set up recycling facilities that can handle 2.5 million tons of plastics per year, which is on par with the company’s annual production in and outside of Korea. 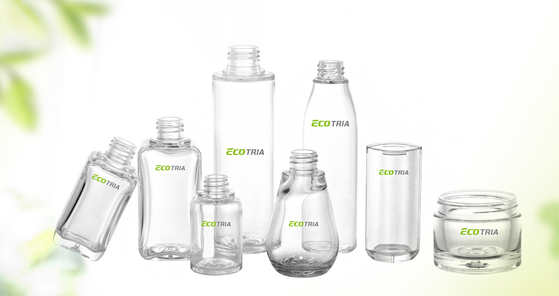 SK Chemicals, another chemical affiliate of SK Group, has recently started sourcing its chemically recycled plastics to cosmetics companies such as Loreal and Lancome. In May, the company acquired 10 percent of China-based PET recycling firm Shuye at 23 billion won to commercialize chemically recycled plastic called glycolmodified polyethylene terephthalate, also known as PETG, in Korea. PETG is known to be more durable and more resistant to high temperature than more familiar PET.

Lotte Chemical, Korea's No. 1 PET producer, is also investing 100 billion won into building recycled PET manufacturing facilities in Ulsan by 2024. The new facilities will have an annual recycled PET production capacity of 110,000 tons.

By 2030, it plans to convert the entire production capacity of 340,000 tons of PET at its Ulsan factory into recycled products.