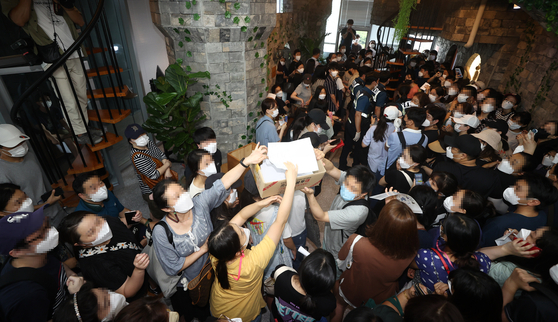 Customers fill the headquarters of Mergeplus on Friday afternoon in Yeongdeungpo, western Seoul, demanding refunds after the company reduced the number of affiliated shops and stopped selling Mergemoney on Aug. 11. [YONHAP]


In a scene reminiscent of a bank run, angry customers swarmed the offices of Mergeplus Friday after the discount coupon company abruptly changed its terms of service, with police being called in to restore order and the mob trying to block employees from going home that evening.

The company runs Mergepoint, which sells Mergemoney, coupons that can be used to get 20-percent off at a wide range of establishments. Due to concerns from regulators, the number of participating shops was suddenly cut and customers want their money back.

“We will temporarily reduce the scale of the service to ensure legality in our business and register as an electronic financial service, then resume our service,” the company said on Aug. 11. “We will fully abide with the regulator’s guidance to ensure sustainable management.”

Mergepoint is offering to reimburse customers at a rate of 90 percent. For many, that wasn’t enough.

“This was all a scam,” read one comment on the app’s review section on Google’s Play Store.

The app also has a membership program for customers who pay a monthly fee of 15,000 won. The members get 20 percent discounts at some locations without buying Mergemoney, and the subscription automatically renews.

A total of 200 companies signed up, including food and beverage chains, such as Ediya, Caffebene and Mad For Garlic, GS25, Tmon and WeMakePrice.

That number was dramatically reduced to about 20 following the announcement from Mergeplus. The company also stopped selling new Mergemoney.

The move came after the Financial Supervisory Service (FSS) said on Aug. 4 that Mergeplus would have to register as an electronic financial services business.

It has not been registered, so there was no cap on the amount the customers could buy through the app. An electronic financial service has a 2-million-won limit.

The FSS said it will investigate Mergeplus. If it finds that it has been operating as an electronic financial service without registering as one, the owner could be sentenced to up to three years in jail or fined up to 20 million won. The CEO is Kwon Nam-hee.

Having no limits to how much customers could purchase was one of the major reasons Mergeplus experienced significant growth. The other reason was its partnerships with popular chains and also with financial companies.

In June, KB Koomin Card signed a memorandum of understanding to introduce a private label credit card (PLCC) this year to give additional rewards and benefits to users of Mergepoint. Hana Members, a membership service of Hana Financial Group, started a promotional program last month to allow its members to get benefits while using Mergepoint. The partnerships with traditional players upped the credibility of the service.

In addition to the protests at the Yeongdeongpo, western Seoul, headquarters, users organized online. “A Community of Mergepoint victims,” a Naver café, was established on Aug. 11 and had over 24,000 members as of Sunday. People shared information on how they got their refunds and photos from the scene.

An online petition posted on the Blue House website on Aug. 12 was signed by 22,200 people as of Sunday.

“The service has been running for two years, but how could the financial supervisor not have seen this until now?” read the petition. “It is ridiculous that the consumers and shop owners are being burdened with damages without any measures being taken.”

Consumers pointed fingers at not only the FSS but also the shops and retail establishments for not thoroughly reviewing the app’s legality. Internet users even shared a list of shops that still accepted Mergepoint as payment and spent their coupons to pass on the damages.

“My mom owns a restaurant and we have been in so much debt since the Covid-19 pandemic,” an internet post read on Thursday. “We were so happy when customers poured in today. About 80 percent of the payments were made in Mergepoint, and we had no idea what was happening until now. What are we going to do if we don’t get paid?”

Kwon, the CEO of Mergeplus, asked customers to “please trust us until things work out” in a phone call interview with the Chosun Ilbo on Aug. 13.

The company is working on refunds, and the business will soon be “back to normal,” Kwon said.

Kwon claimed that Mergeplus had also been preparing for major investment and is developing an online payment service that will ensure its fiscal soundness. According to Mergeplus, it expects 85 to 120 billion won in revenue through the PLCC partnerships.

“We understand that users are worried they might not get their money back,” Kwon said. “But with so many people swarming into the building, our refund process is getting slower. We understand them, but this just results in the process getting even slower.”

As Mergepoint buries books, FSS reports it to the police

Mergeplus raided by police, 3 executives told not to travel