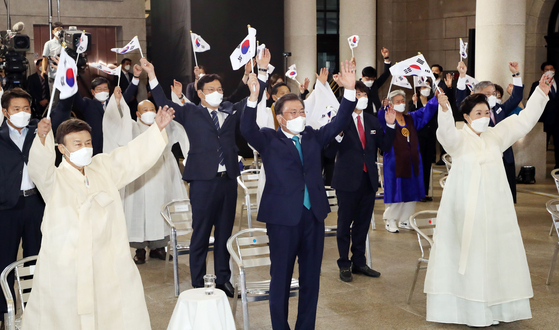 Unlike his previous Liberation Day speeches, President Moon Jae-in stuck to the standard position on policies related to Japan and North Korea in his address Sunday.

“Since normalizing diplomatic relations, Korea and Japan have long been able to achieve economic growth together through a division of labor and cooperation based on the common shared values of democracy and a market economy,” Moon said in his speech at the Culture Station Seoul 284, located next to Seoul Station, on Sunday. “This is the direction our two countries should continue to go in, moving forward together [...] For historical issues that need to be rectified, we will resolve them through actions and practices that are consistent with universal values and the standards of the international community.”

Some of the thorny issues between the two nations, such as the so-called “comfort women,” or women who were forced into sexual slavery by the Imperial Japanese Army during World War II, or forced labor, were not mentioned in detail.

During last year’s speech, Moon highlighted Korea’s Supreme Court decision in 2018 that obligated Japanese companies to pay compensation to the Korean laborers who were forced to work during Japan's rule over Korea from 1910 to 1945, pledging to uphold the court's verdict, despite Japan’s protests.

A characteristically divisive message on Japan was, however, delivered by Kim Won-woong, president of Heritage of Korean Independence, which researches Korea's independence history, in a pre-recorded video message played during the ceremony.

“The pro-Japanese groups have thrived for generations, whilst the descendants of independence activists still live in poverty,” Kim said. “And these pro-Japan groups are still active, fighting so that they will not lose the wealth they aggregated by being pro-Japanese during the Japanese occupation of Korea [...] and are calling for the publication of textbooks with pro-Japan interpretation of historical events.”

On North Korea, Moon stressed the need to focus on the peaceful unification of the two Koreas, using Germany's unification as an example, but did not go into details as he has previously done in Liberation Day speeches.

“Division is the biggest obstacle blocking our growth and prosperity and simultaneously a tenacious barrier to permanent peace. Like Germany, we can also remove this barrier,” Moon said. “Although unification may take some more time, we can create a Korean Peninsula model in which the two Koreas coexist and contribute to the prosperity of Northeast Asia as a whole through denuclearization and permanent peace on the peninsula.”

In his speech last year, Moon highlighted the Panmunjom Declaration, the agreement signed by Moon and North Korean leader Kim Jong-un during their summit in 2018, where they agreed to denuclearize the Korean Peninsula and end the war between the two sides. The two Koreas are technically still at war, as the Korean War (1950-53) ended with an armistice, not a peace treaty.

In vowing to the commitments made in the declaration, Moon floated ideas on an inter-Korean railway and other economic projects in his speech last year, which he had also discussed in detail during his Liberation Day speech in 2019.

The changes in Moon’s speech are not without reason, especially given the context of recent U.S.-Korea and inter-Korean events.

In her visits to Tokyo and Seoul last month, U.S. Deputy Secretary of State Wendy Sherman emphasized U.S.-Korea-Japan cooperation for key security and economic interests in the region.

Pyongyang slammed Seoul and Washington last week for pushing through with their summertime joint military exercises despite the North’s continued protests against them.

In his speech President Moon also highlighted Korea’s speedy economic development from the 1960s to today and the nation’s growth in soft power seen through the global popularity of K-pop as well as other Korean music, arts, films and games, urging people to recognize the role Koreans are expected to play to resolve issues common to the global community.

“The Republic of Korea has been invited to the G7 Summit for two years in a row, which signifies the start of a new world order,” he said. “Building upon capabilities nurtured through openness and cooperation, we will actively contribute to overcoming the Covid-19 crisis as well as to establishing a peaceful order and the reconstruction of the global economy in the post-Covid-19 era. In particular, we will take the lead in creating value and order in the new era based on our experience with economic growth — having moved from a developing to an advanced country — and the soft power amassed through Hallyu [Korean wave] and Korea’s response to Covid-19.”

This year's Liberation Day speech was Moon's last as his presidency will come to an end in May 2022.

What matters is implementation