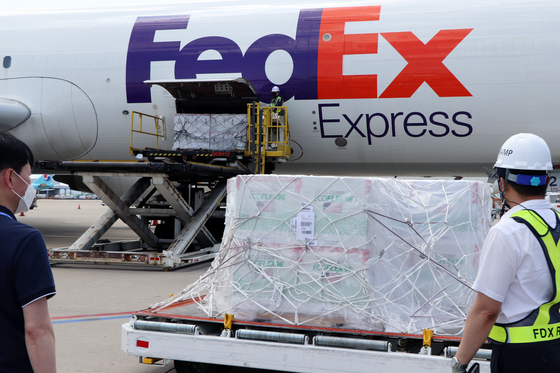 The newly arrived 400,000 doses of Johnson & Johnson's Janssen Covid-19 vaccine are being unloaded from an airplane at Incheon International Airport on Sunday afternoon. [KOREA DISEASE CONTROL AND PREVENTION AGENCY]


President Moon Jae-in said 70 percent of the country’s population will be vaccinated with a second dose of a Covid-19 vaccine by the end of October, a month earlier than the initial plan.

“In October, 70 percent of the total population will have received their second shots, and vaccination rate targets will be raised once more,” Moon said during a speech to mark Liberation Day on Sunday.

As of Saturday midnight, 19 percent, or around 9.73 million people out of the country’s population of 52-million had been fully vaccinated, according to the Korea Disease Control and Prevention Agency (KDCA).

This means more than 26 million people will have to be fully vaccinated in the next two and a half months to achieve the newly-set goal.

Recently, the government hastened the milestone of giving at least one dose of a Covid-19 vaccine to 36 million people, or 70 percent of the population by the Chuseok harvest holidays which start on Sept. 18 — earlier than the previous plan shooting for the end of September.

Considering the interval of two major vaccine distributors — Moderna and Pfizer — is set at six weeks, the government may be reflecting its confidence that it can complete the second dose of Covid-19 vaccines by the end of October, and attain herd immunity by mid-November.

“The government's goal of expanding the vaccination rate was set in consideration that it would be possible to attain even if there are some variables,” Sohn Young-rae, a senior epidemiological strategist at the government’s Central Disaster Management Headquarters, said regarding President Moon's remarks.

According to the government's vaccine procurement schedule, a total of 18.57 million doses of Covid-19 vaccine are set to be shipped to the country by the end of August.

Of those, 66 million doses will be Pfizer while Moderna will account for 40 million.

In addition, a batch of 400,000 doses of Johnson & Johnson's Janssen vaccine donated by the U.S. government arrived in Korea on Sunday, which will be used to inoculate prisoners and sailors starting Aug. 23. with another 100,000 doses Korea directly purchased from Janssen.

However, if foreign drug firms announce shipment delays or cut expected volume, a setback in the government’s vaccination program will be inevitable.

In addition to a delay in a shipment of Moderna’s vaccines in late July, the U.S. pharmaceutical company more than halved August shipments to Korea.

The government temporarily extended the interval between two doses of mRNA-based vaccines — Moderna or Pfizer — from four to six weeks, causing delays for many people waiting for their second shots.

The government on Friday sent an official delegation led by Second Vice Health Minister Kang Do-tae to the headquarters of Moderna in the U.S. state of Massachusetts on Friday to express strong regret over the delay and discuss plans for future supplies.

"We asked for a faster supply of a larger quantity of vaccines, to which Moderna apologized and promised to do its best,” Kang said.

Details of the discussion will be announced in an upcoming briefing on Tuesday.

With an unexpected shortage of vaccines, the government reversed the age restriction on AstraZeneca's vaccine, imposed last month due to a risk of rare yet serious blood clots, to allow its use on people aged 30 and above.

An age limit of 50 and older was put on AstraZeneca vaccine recipients due to the risk of thrombosis with thrombocytopenia syndrome, or TTS.

The government’s changed vaccination policy came after reports that an increasing number of clinics are throwing away a surplus of AstraZeneca vaccines due to the age restriction.

The Covid-19 Vaccination Task Force said Friday that people aged 30 and above can now sign up for and receive leftover AstraZeneca shots at clinics, public health centers and nursing homes.

The participation rate of people between 18 to 49 in the vaccination campaign is also set to be an important variable for the government's goal.

Contrary to expectations, the reservation rate for those aged 18 to 49 has remained around 60.4 percent so far.

Reservations for vaccinations for around 16 million adults under 50 kicked off last Monday, and health authorities were hoping this broad age group would pull up the current vaccination rate.

“The reservation rate [of people between 18 to 49] fails to meet the target of 70 percent and is lower than the reservation rate of the elderly at 80 percent,” health official Sohn said earlier in a briefing, urging those that are eligible to make reservations for their health and the safety of everyone. 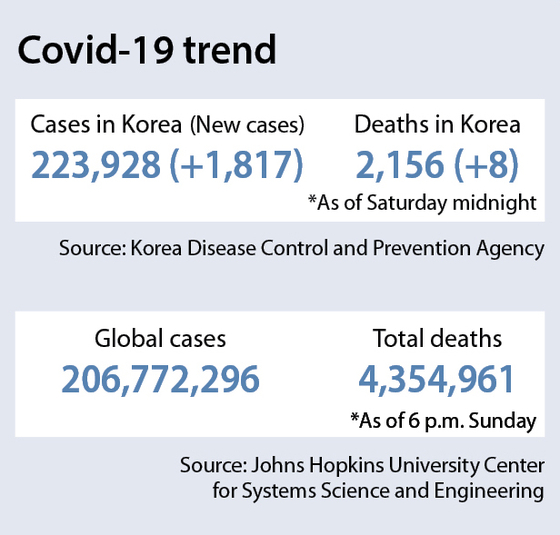 Meanwhile, Korea saw 1,817 new cases of Covid-19 on Sunday, the highest number ever recorded for a weekend, increasing concerns about the further spread of the virus during the three-day Liberation Day holiday period that will run until Monday.

Korea’s most popular resort island of Jeju decided to raise distancing rules by one notch to the toughest Level 4 starting Wednesday, and shut down 12 designated beaches.

Jeju has witnessed a sharp rise in virus cases as more people have traveled to the island during the summer vacation season. There were concerns that more infections may pile up following the extended Liberation Day holiday.