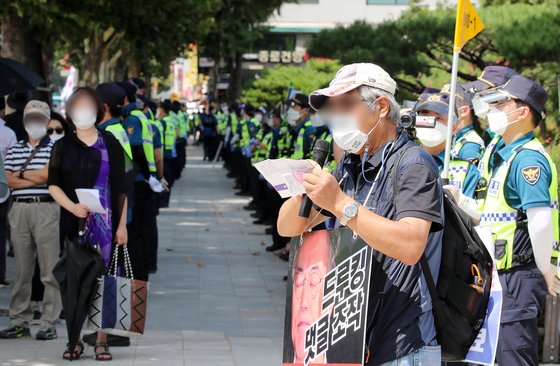 Members of a conservative group hold a press conference near Jongmyo Square Park in central Seoul on Sunday to commemorate Liberation Day. Rallies of all sizes are banned in Seoul due to coronavirus concerns. [NEWS1]

Conservative groups defied a ban on rallies to commemorate Liberation Day in central Seoul on Sunday, some clashing with police in the area.

“I just want to take a walk to the Blue House to protest the Sept. 19 inter-Korean Comprehensive Military Agreement,” said Jeong Gwang-seok, a 46-year-old man who traveled to Seoul from Mokpo, South Jeolla, and was stopped by the police near Gwanghwamun Square on Sunday. “As a Korean citizen, don’t I have the basic right to protest? I don’t know on what grounds the police are stopping me.”

Jeong is a member of one of 40 groups in Korea who reported in advance their intention to take part in rallies in Seoul over the weekend to commemorate Liberation Day, which falls on Aug. 15 annually.

In Seoul, rallies of all sizes are prohibited under Level 4 social distancing guidelines in place in the city and environs. Police put up fences and established checkpoints in and around the square. About 10,000 officers were dispatched to the area, according to the police.

Some conservative groups said they would hold what they called “walkathons” in the Gwanghwamun and Seoul Station areas over the weekend, arguing that these are not rallies.

They included a far-right political group led by Rev. Jun Kwang-hoon, who was at the center of a major coronavirus cluster stemming from the Liberation Day rallies this time last year.

Jun, founder of the Sarang Jeil Church in Seongbuk District, central Seoul, a Presbyterian church with about 4,000 adherents, did not take part in the rallies.

Members of the group held a press conference near the square on Sunday afternoon.

“By preventing passage through certain areas and establishing police checkpoints, the Moon administration is clamping down on the basic rights of the people,” Lee Myung-gyu, a member of the group, said in the press conference. “We will hold the president and the administration accountable for the violation of our basic rights.”

Some rallygoers scuffled with police, including a man who lay down in protest on a street near Jonggak Station when the police stopped him from walking toward Gwanghwamun Square and a man in his 80s who tried to hang a banner near the City Hall Station and was stopped by police.

“We just want to take a peaceful walk from one location to another,” said a man who said he came out to protest the Moon government. “They’re not letting us hold up the flag of Korea, or shout slogans. I don’t think this is what a democratic country should do.”

Some people passing through the square complained of additional complications in traffic caused by the police fences.

“I understand that the authorities want to prevent unnecessary spread of the coronavirus, but I think they might have gone over the line in clamping down on the area with fences, causing additional traffic mayhem,” said Park Jeong-kyu, a 44-year-old man who was passing through the square with his daughter.

Overall, no rallies of the scale seen at the square last year took place over the weekend.

Rallies on Liberation Day weekend last year in the Gwanghwamun Square involved 20,000 to 30,000 people, according to police estimates, which resulted in around 600 infections, giving rise to the third wave of Covid-19 in Korea. Many of the participants were members of conservative groups, including the one led by Jun. Jun was indicted last week for alleged violations of Infectious Disease Control and Prevention Act and Assembly and Demonstration Act.

To prevent similar infections, police set up fences at the square during National Foundation Day and Hangul Day last October.

But some conservative groups have argued that the government’s responses to rallies is a double standard, given that an 8,000-person rally led by Korean Confederation of Trade Unions, a liberal group, was able to take place in Jongno District, central Seoul, last month. Police are investigating the rally’s organizers.

Korea is in the midst of another wave of infections, with the daily cases above 1,500 around mid-July and 2,000 last week.