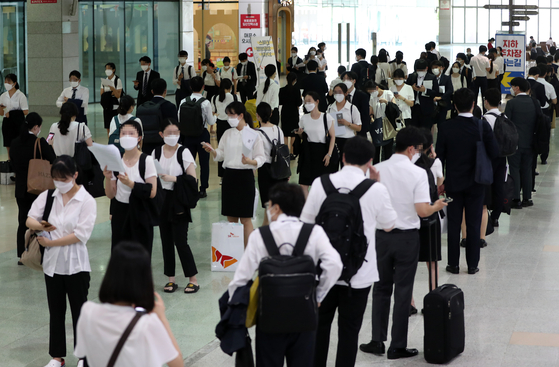 Applicants for Grade-9 civil service exam wait in line to have an interview at Kintex in Goyang, Gyeonggi on Aug. 5. [YONHAP]


Civil servant is one of the most sought after jobs in Korea, and the competition is just becoming more intense as those who already have jobs, and even mothers, are entering the already heated race for the available spots.

Stable working conditions, good treatment and work-life balance are the major factors that draw Koreans in. People believe work that civil servants do as less competitive than work at private companies and that they are free from heavy pressure to produce.

A 33-year-old office worker who works at a marketing company in Seoul has been studying for a civil service exam since last year. He watches online lectures at night after work and spends whole weekends studying with other people also preparing from the exam.

“I worked hard to get my current job, but I don’t think it really fits me. There has been a lot of pressure on me to come up with meaningful achievements and productive outcomes,” he said. “It seems like the work that public officials do is less stressful, and above all things, they are guaranteed tenure.”

He is aiming for a Grade-7 civil servant position. Korea has a nine-grade system for career civil servants, with Grade-1 being the highest. Civil servants in Korea are guaranteed tenure, and the salary goes up according to a fixed schedule. They also get a pension. 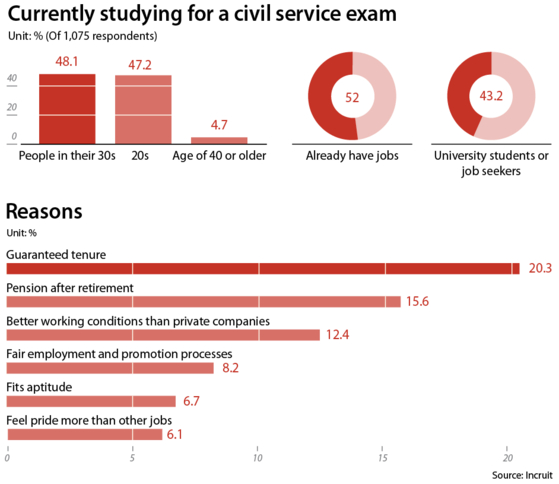 According to a recent survey by Incruit of 1,075 people, about 52 percent of people who are currently studying for a civil service exam are people who already have jobs. When the job portal conducted the same survey in 2019, the ratio was 45.9 percent, while it was 38 percent in 2016.

The Moon Jae-in administration’s efforts to increase the number of public-sector jobs is another reason. All Koreans, regardless of their age, are allowed to take the civil service exam and become public officials.

The number of public officials in Korea rose by 99,465 during three years and eight months under the Moon administration, more than the increase under the four previous administrations.

Workers can’t easily quit their jobs to only focus on the exam, so they do both at the same time amid the concerns that they would not get a job again when the unemployment has been a serious problem lately.

“The introduction of 52-hour workweek and the spread of the remote working system amid the pandemic are other reasons behind the recent movement to start studying the civil service exam,” said Jeong Yeon-woo, manager at Incruit’s brand communication team. “They gather information via online communities and study for the exam through online lectures.”

Many housewives and mothers are among the applicants.

Naver Café, an online community run by Naver, has more than 10,000 posts from mothers who have been studying civil service exams or have passed the exam.

“I tried to focus on studying very late at night or when my children were in the kindergartens. I always rushed to libraries on weekends when my husband could take care of the children,” according to a post written by a mother who has passed the exam.

Most of them are middle-aged women who were forced to quit jobs to give birth or due to childcare.

Another post read, “my parents and parents-in-law were all so happy when they knew about me passing the exam. Now I want to start a new life for myself instead of just being a mother of my child.”

“It is relatively difficult for them to be hired in private companies as their careers have been halted for a while,” said Lee Sang-lim, a research fellow at department of the population policy research at the Korea Institute for Health and Social Affairs. “Becoming a public official is a popular choice for them as it doesn’t require any work experiences."

Critics say that a lot of talent is being concentrated in the public sector. Many young Koreans are wasting too much time for studying for the civil service exam which could cause a delay for them to start economic activities. This could lead to a decline in national competitiveness, they argue.

“When the global competition over advanced information and technology gets intense, the working population in Korea is on the decline,” said Hyun Jung-taik, who formerly served as president of the Korea Development Institute and president of the Korea Institute for International Economic Policy. “Having a wealth of talent only in public sector is a great loss to the country, and can cause a distortion in the allocation of labor.”

The Blue House must answer (KOR)