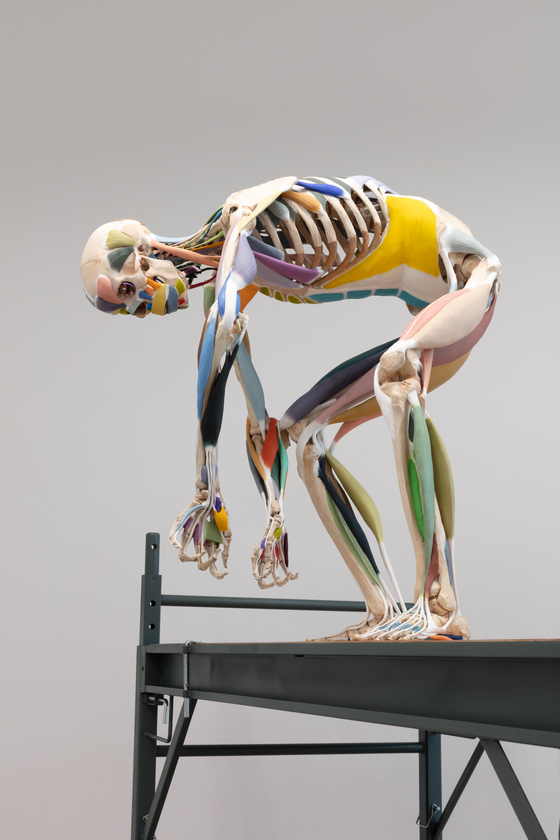 A close-up view of ″Sculptors″ by Xooang Choi [HAKGOJAE GALLERY] 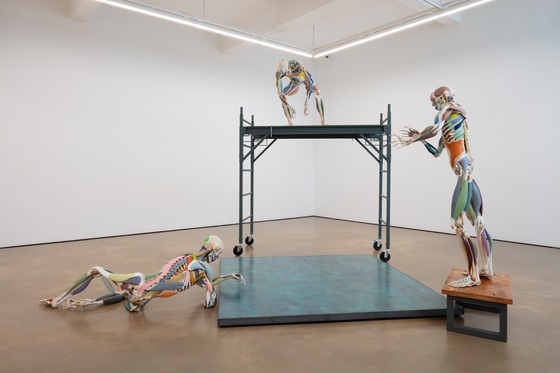 
Those who are familiar with Korean artist Xooang Choi, 46, who gained international fame for his uncanny hyper-realistic sculptures of distorted human bodies, might be surprised to see his new works now on view at Hakgojae Gallery in central Seoul.

His solo show “CHOI Xooang: Unfold,” which kicked off at the gallery in late July, features no sculptures in his signature style such as a pair of wings comprised of human hands instead of feathers or a group of naked people whose body parts are exaggerated or omitted.

Instead, there are abstract paintings that are installed in the center of the room rather than on the walls, so that they can be seen from both front and back sides, as well as sculptures that resemble simplified anatomical dummies with colorful bones and muscles. 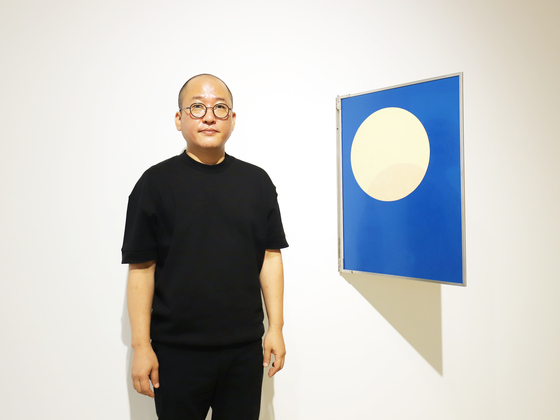 
The drastic change in Choi's style comes after the artist took a hiatus of one year because of serious injuries in both his arms which saw him undergo multiple surgeries and rehabilitation. “After years of labor-intensive work, I completely ruptured a ligament in one arm and seriously tore a ligament in the other arm in 2018,” the artist told press at the gallery late last month. “The situation forced me to give up my old habits in work but also helped me open my mind to every new kind of work.”

The artist also said he took interest in the gap between the facts about human muscles that he learned during the treatment of his arms and artists’ classic anatomical knowledge. Accordingly, he turned his eyes to écorchés, which refer to human or animal figures with the skin removed for artists’ study of muscles.

Celebrating that he has been “freed from the conventional anatomical knowledge and from pressure to make sculptures based on it,” Choi created his own écorchés with some fictional elements. “I added some fictional muscles and painted each of the muscles with a different color. The colors have no meaning [unlike the colors in real anatomical dummies,]” the artist said.

“The new work encouraged him to observe the nature of sculpture and his own attitude toward sculpture from a distance; and, it propelled him to begin a new series of work that traverses between 2-D and 3-D,” said independent curator Maeng Jee-young. 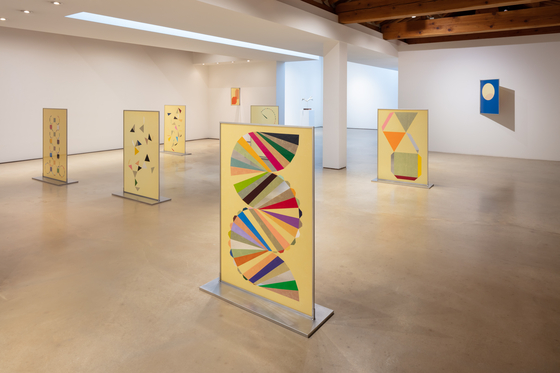 
While the new series consists of abstract paintings they have an element of sculpture thanks to their unique installation. “Actually, they are the unfolded images of three-dimensional structures I imagine [...] As I’m a sculptor, I always imagine 3-D things,” the artist said. But not all the structures represented by the unfolded images are possible to make in reality, he added.

For the works, the artist uses a special process of repeatedly soaking paper in oil and then drying it. This makes the paper translucent so the painting on one side shows through to the other side. Therefore, people can view the painting, while moving around the work, just like when they view a sculpture.

It is said that artists who find success with a unique style in their 20s or 30s face the risk of becoming stagnant, if they don’t make changes in their 40s. Choi's solo show suggests that he has overcome that risk by turning his arm injuries, which could have been career-ending for a sculptor, into an opportunity to widen the horizon of his works and his view about art.

The exhibition runs through Aug. 29. Admission is free.