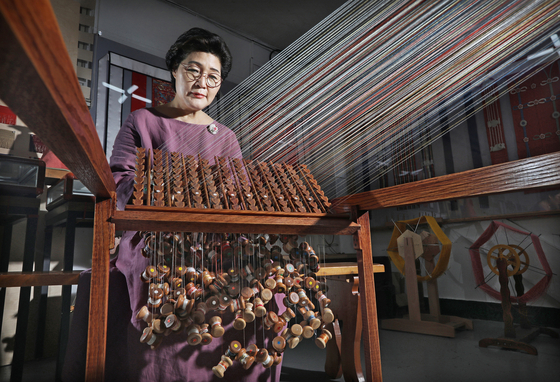 Lim Keum-hee, the only dahoejang left in Korea, makes kwangdahoe at her workshop located in Gwangjin District of eastern Seoul. [PARK SANG-MOON]


Dahoe is made by twisting silk thread into a larger strand of thread and is also known as braiding. In Korean, such weaving thread is called dahoe chinda, and a master craftsperson who makes dahoe is called a dahoejang. Mangsu refers to a thicker version of woven thread. Dahoe and mangsu played a pivotal role in Korean clothing culture during the Joseon dynasty (1392-1910), an era that had strict etiquette.

Lim Keum-hee, 60, is the only dahoejang left in Korea and has brought dahoe and mangsu back to life by reproducing and restoring them to preserve the tradition.

Kwangdahoe was mainly used for belts and accessories for Joseon men. Dongdahoe was used in traditional ornaments in women’s clothing or other accessories that required knots. Mangsu, with its thick and brilliant patterns, usually decorated costumes or eobo, a type of stamp that symbolized the king’s authority and sovereignty that was used for official documents. 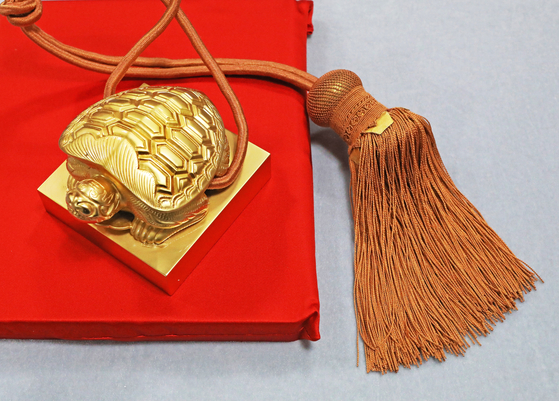 Yi Seong-gye's (1335-1408) eobo with mangsu, who was the founder and first King of the Joseon dynasty [PARK SANG-MOON] 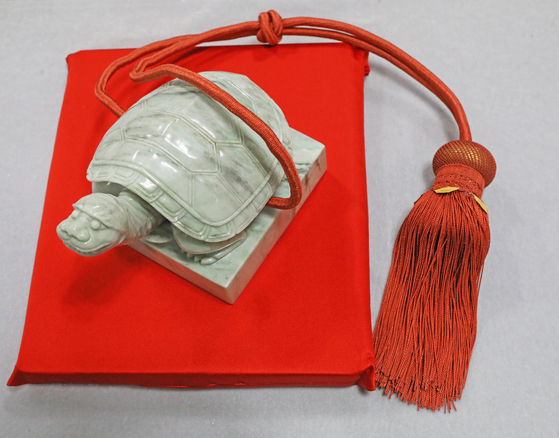 
Dahoe and mangsu, made using traditional techniques, are intricate in both their designs and patterns. Lim uses natural materials to dye the thread to reproduce traditional colors. Although the pigments are usually created by yeomsaekjang, a master craftsperson who specializes in natural dyes, Lim learned the techniques herself after she found it difficult to get the exact colors she was looking for. 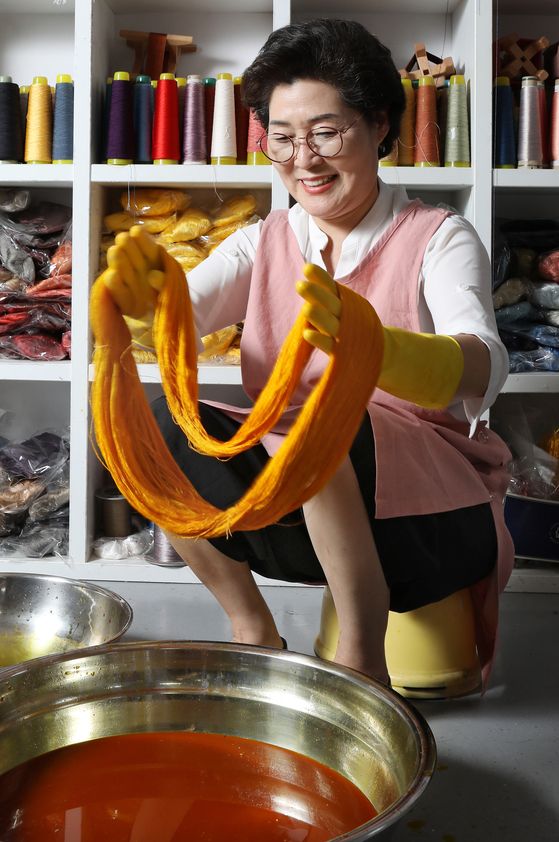 
The process of making dahoe and mangsu is not an easy one. It requires a high level of endurance from the dahoejang. For dahoe, the most you can weave in one day is a mere two to three centimeters. Lim, who has dedicated over 30 years of her life to dahoe and mangsu, would never have become the master craftswoman she is today were it not for her passion for Korean tradition.

Lim was born the youngest of eight siblings in Yeongju, North Gyeongsang, where traces of Confucianism still remained in society. As a child, Lim visited many historic sites and relics with her father. Her name, Keum-hee, derives from the Chinese characters “Keum,” meaning silk, and “Hee,” meaning woman. Lim believes she was destined to be a dahoejang. 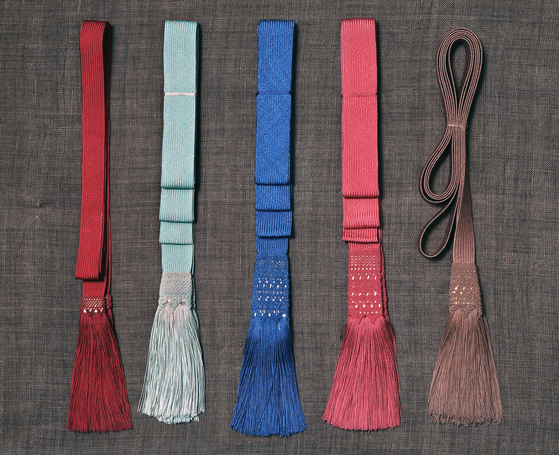 Kwangdahoe was used in traditional clothing, having a flat and wide shape. [PARK SANG-MOON]


Lim entered the world of dahoe in 1983, after getting a job in Seoul. Living alone, she visited handicraft shops to learn knot-tying and embroidery as a hobby. Later on, while at a bookstore searching for material on other techniques, she met Kim Ju-hyun, the best-known maedeupjang, a master of decorative knotting, before he died in 2003. He became her teacher.

Lim learned knotting techniques from Kim for first two years and became his only apprentice among numerous students. She was taught the functions of dahoe and set the huge mission of saving dahoe from becoming extinct.

From 1987 to 1997, Lim learned everything there is to know about dahoe. It took her a full ten years just to learn the basics. She eventually received a handwritten document from Kim, certifying that she had “mastered” all the techniques from him.

Kim introduced Cho Su-hyun, who is a renowned expert in mangsu, to Lim. It was an opportunity for her to learn more techniques and study under two of the best masters in the field. The two teachers had different teaching styles — Kim was gentle like the silk thread, while Cho was strict but encouraging. 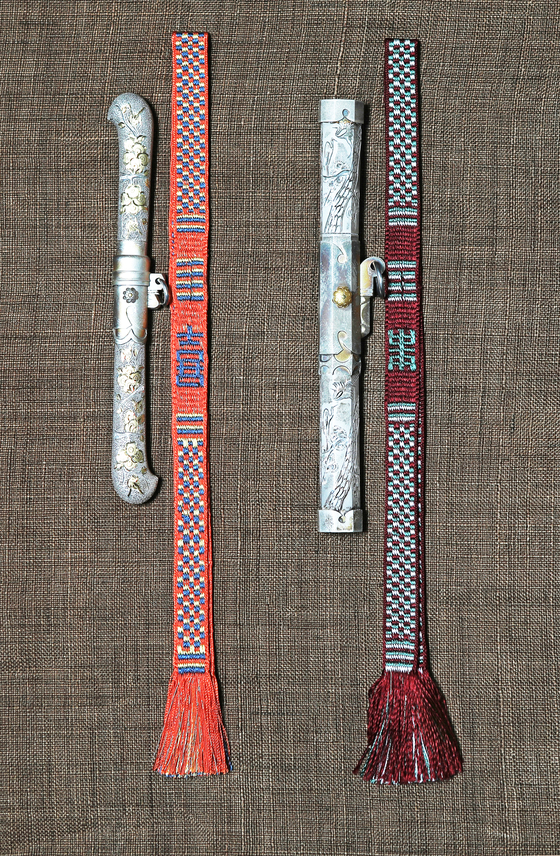 Dahoe was also used as a strap for jangdo, a small knife used in the Joseon era. [PARK SANG-MOON]


When making dahoe, one must follow a strict order and be precise and careful not to make any mistakes. If even one single thread is woven incorrectly, then the entire pattern and shape will turn out completely different. If a mistake is made, the entire process must start again from the beginning.

All ten fingers dance gracefully when the dahoejang weaves the threads into dahoe. However, the repetitive weaving process using small weights tends to lead to hip pain and fatigue.

Despite the physical pain and financial issues Lim faced as a dahoejang, she said that she was unable to quit because of the handwritten document from her teacher.

She said she felt responsible for preserving the tradition of dahoe, and therefore decided to dedicate her life to it. Her eldest daughter agreed to carry on the tradition, which Lim says she feels relieved and happy about. 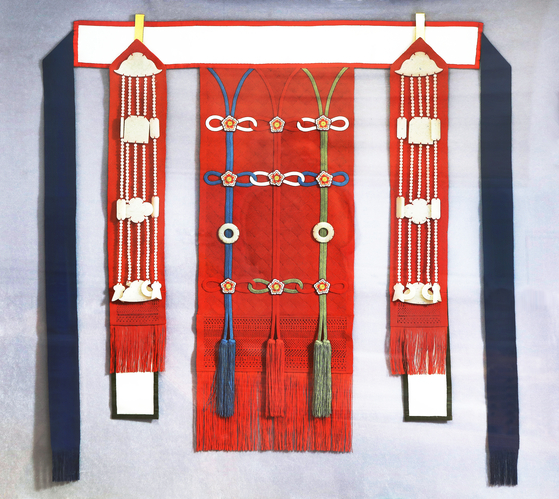 Mangsu was used to decorate the clothing worn by the kings and their subjects of Joseon. [PARK SANG-MOON]


Koreans once believed that dressing accordingly would lead to good behavior. It is this perspective that truly manifests itself in the beauty and significance of Lim’s work.