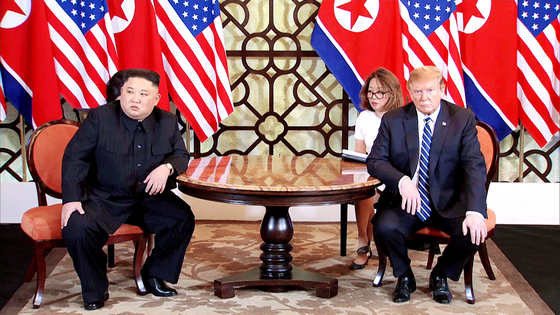 Seoul may have helped Pyongyang cover the costs of its summit with Washington in Hanoi in 2019, according to multiple sources in the Korean government.

“There is talk within some political circles that the South Korean government paid a part of the Hanoi summit expenses of North Korean leader Kim Jong-un and his delegation,” a source told the JoongAng Ilbo on Sunday. “They allege that the funds were procured through the National Intelligence Service [NIS].”

The South may have paid $400,000 to $500,000, according to another source, a senior-ranking official who took part in the preparation for the summit in Vietnam.

“A significant portion of the cost of the meeting was borne by the Vietnamese government, but some had to be borne by North Korea, and the South Korean government may have paid it,” the source said.

“Given the North’s previous track record of demanding some form of monetary return for taking part in an international summit, such rumors are not surprising,” said another source.

North Korean leader Kim held two summits with U.S. President Donald Trump – the first in Singapore in June 2018 and the second in Hanoi, Vietnam, in February 2019.

For the first, Singapore made an official invitation to Kim to visit the country, and paid for the expenses of his visit. Before the summit took place, Singapore’s Prime Minister Lee Hsien Loong announced the expected costs to be around $20 million and said the country was “willing to pay” it to contribute to an international event. Afterward, Singapore's government announced that it spent $16.3 million on the summit.

For the second summit, Kim was again invited as a guest of the Vietnamese government, but Hanoi never announced how much Kim’s visit cost or how much it covered.

When the JoongAng Ilbo got in touch with the NIS regarding the allegation that the South Korean government helped the North cover some costs of that summit, an official denied knowledge of it.

But another source, known to be close to the Moon administration, said that the NIS has a designated fund it can use “without keeping tabs on where the money was used,” and that this could have been used “to encourage the North to come forth to join the summit in Hanoi.”

National Security Advisor Suh Hoon, who was NIS chief at the time of the summit, could not be reached for comment as of press time Monday.

If the allegation is true, the South Korean government may have to answer questions on whether such a payment was in violation of international sanctions against North Korea.

Officials in the Moon administration denied the allegation.

“It doesn’t make sense that the South Korean government would cover the costs of the North Korean government,” said Youn Kun-young, a ruling Democratic Party legislator who was a presidential secretary during the Hanoi summit. “It’s just out of the question.”

Some sources argued that even if the allegation were true, the payment wouldn’t be illegal.

“This would be a cost that the government bore legally, as part of its diplomatic efforts with the North,” an official known to be close to the Moon administration told the JoongAng Ilbo. “This is a completely different case from the $400 million cash-for-summit scandal.”