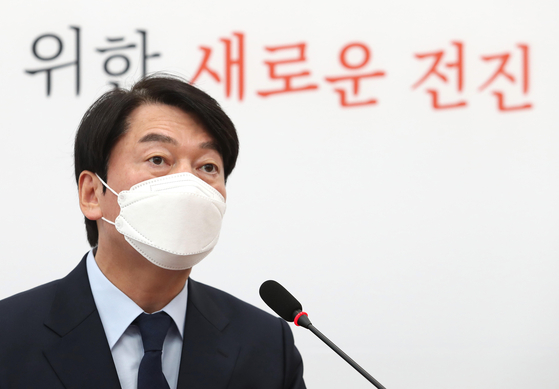 People's Party Chairman Ahn Cheol-soo announces the breakdown of merger negotiations with the People Power Party at the National Assembly on Monday. [NEWS1]

"After a long period of deliberation and reflection, I am very sorry to say that efforts to unite the People's Party and the People Power Party have ended today," Ahn said at a press conference at the National Assembly Monday.

"I did not achieve the final result [I desired] because I am inadequate. I am sorry to the people who hoped for a merger," he said.

Ahn suggested that the desire to avoid splitting the conservative vote in elections by merging the two opposition parties was not a sufficient reason for the PP to join forces with the PPP when the two parties differ on political issues.

"Rather than considering the opinions of PP members and supporters during the process of discussing for integration, we hurt them," Ahn said.

"We have come to the conclusion that a merger for the sake of uniting conservatives or eliminating a small party is never sufficient to change the government or to create a better country," he explained.

He added, "It is impossible to achieve a change of government without expanding our support base," suggesting that a mere merger would not be able to expand the conservative voting bloc to the extent necessary to take control of the Blue House or the National Assembly.

Ahn told reporters that he would only speak about his political plans at a later date.

"We must first re-organize the party, which has been in been in a state of confusion, and communicate with our party members to find a way forward," Ahn said.

Regarding the possibility of joining forces with former Deputy Prime Minister Kim Dong-yeon to consolidate a separate presidential candidacy in opposition to the current government, Ahn said, "I don't have any plans at the moment," but added, "Since I am thinking about the future of the country and how to make a better Korea, I am ready to meet and discuss [that possibility]."

Ahn remained mum on the possibility of a potential presidential run himself. A former medical doctor and software entrepreneur, Ahn has run twice previously for the presidency in 2012 and 2017 and also twice for the Seoul mayor's office in 2018 and 2021.

According to the PP’s own party regulations, any potential candidate for the party’s presidential ticket must resign from a party post at least a year before the presidential election.

As the race is due to take place in May next year, Ahn would need the party to amend its own regulations to enable him to run for his own party’s nomination, should he wish to do so.

In his comments, Ahn also criticized the adversarial nature of Korean parties along the political spectrum.

“A change of government should not entail a repeat of the past hostilities between the two major parties,” he said. “Politics today should now boldly shift from ideology to practicality, from confrontation to problem-solving, and from the past to the future.”

Ahn suggested that the PP would remain an important actor in Korean politics despite the breakdown of merger talks with the PPP. “The People's Party is a pragmatic centrist party. We will unite people and solve our current problems while leading national reform and setting a future agenda for younger generations.”