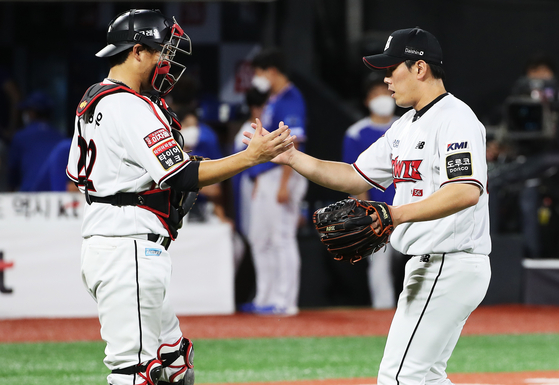 
The KT Wiz held onto their narrow lead at the top of the KBO by winning all three of their games against the Samsung Lions this weekend. KT's distance from the LG Twins remains unchanged, although LG have one game in hand.

The series at Suwon KT Wiz Park against the third-place Lions was a close affair for the Wiz. The games ended 7-6, 8-4 and 6-4; two of them were comeback victories.

LG had a decent chance to tie with or overtake KT going into the weekend, but dropping two games to the eighth-place Lotte Giants on Friday and Saturday at Jamsil put a stop to such plans.

The Twins' second-place standing stays somewhat secure, however — two other teams may share their 46 wins, but LG still have played five less games than the Lions and six less than the Kiwoom Heroes. 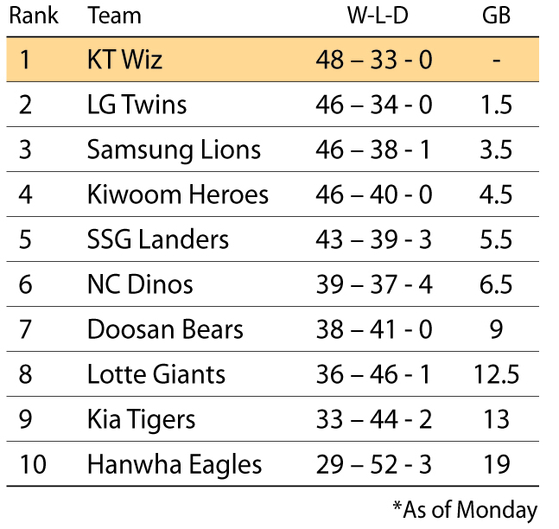 At Gocheok Sky Dome in western Seoul, the fourth-place Heroes faced off thrice against the seventh-place Doosan Bears. Doosan took the first game 16-9, but Kiwoom cut off the fireworks display and won the next two 5-1 and 8-1.

The fifth-place SSG Landers and the ninth-place Kia Tigers went even in their three-game series at Incheon SSG Landers Field. Kia won 8-1 on Friday, then the two tied at 2-2 on Saturday. SSG evened the score on Sunday with a 10-5 victory.

At Daejeon's Hanwha Life Insurance Eagles Park, the sixth-place NC Dinos played three games against last-place Hanwha Eagles and just barely came out ahead. The Dinos won the first game on Friday 5-1, but the two next games ended as ties — 9-9 and 3-3.

Outside of the stadiums, the biggest news of the past week was American pitcher Aaron Brooks being released from the Kia Tigers last Monday. The Korea Customs Service notified the club that the ace had ordered vape products from the U.S. containing traces of marijuana, and Kia acted swiftly.

Brooks apologized for tarnishing the reputation of the club but pleaded innocence, saying that he had meant to order a product that did not contain the drug as he was familiar with Korea's marijuana laws.

The Tigers are scrambling to sign a replacement, but prospects are unclear as of now and Kia's bullpen will be stretched for some amount of time. This could work out especially poorly for rookie pitcher Lee Eui-lee, who may not be given enough time to recover after having thrown 162 pitches at the Tokyo Games. Daniel Mengden's return to the mound on Saturday, his first start since his injury in May, should provide some relief.