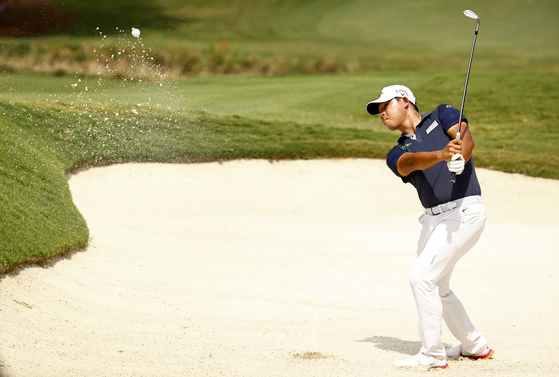 Kim Si-woo takes a shot from a greenside bunker on the 18th hole, the second-playoff hole in a six-way sudden-death playoff, during the final round of the Wyndham Championship at Sedgefield Country Club on Sunday in Greensboro, North Carolina. [GETTY IMAGES]


Kim Si-woo finished tied for second at the Wyndham Championship held at Sedgefield Country Club in North Carolina that ended in a six-way playoff on Sunday.

Kim started the last day of the tournament six off the lead, but he pulled off a 6-under, 64, on the last day to join five others at a total of 15-under, 265, in a six-way playoff.

Kim started his climb with a birdie in the par-4, fourth, where he chipped in his third, but the eagle on par-5, fifth, set Kim up for success. After three more birdies in a bogey-free round, Kim was tied for first with five other golfers, Kevin Kisner and Kevin Na of the United States, Branden Grace of South Africa, Adam Scott of Australia and Roger Sloan of Canada.

The six-way playoff at the Wyndham Championship ties the PGA Tour record for the most competitors in a playoff alongside the AT&T Byron Nelson in 1994 and the The Genesis Invitational in 2001.

For Kim, this second-place finish is his fifth top-10 finish of the season.

"Yeah, it was great round," Kim said at a post-round interview. "First three holes kind of boring, like I didn't make birdie. Then I try to just keep patient, I don't think about like winning, just try to be inside the top-10."

Kim, who won his third career PGA Tour victory at The American Express in February, has now qualified for his sixth successive FedExCup Playoffs beginning later this week alongside Im.