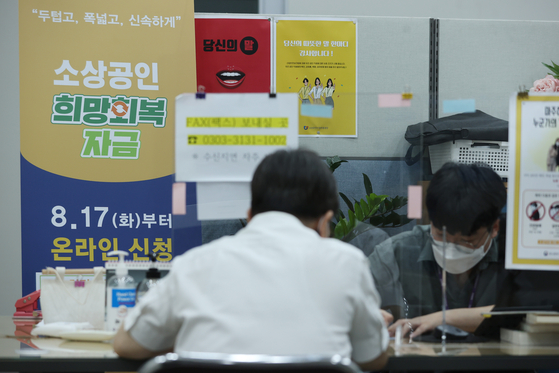 A business owner asks advice about subsidies at the Small Enterprise and Market Service's Seoul office on Tuesday. [YONHAP]

The government started accepting applications from small businesses like restaurants and bars for pandemic subsidies of up to 20 million won ($17,000) -- and payments went out almost immediately.

The fifth of their kind since last year, the subsidies are meant to help small businesses hurt by social distancing measures.

Finance Minister Hong Nam-ki said Tuesday the government’s hope is to hand out 70 percent of the subsidies within two weeks and 90 percent by the end of September.

“As we still can’t see a peak in the fourth wave [of Covid-19 infections], my heart is heavy over the struggles that small business owners and self-employed are going through,” Hong said.

In the first two hours Tuesday, 160,000 applications were accepted, according to the SMEs and Startups Ministry, and 450 billion won in subsidies were paid.

“[The government] has arranged for the funds to be delivered as quickly as possible,” said Kwon Chil-seung, the SMEs and Startups Minister.

To prevent any jamming of the system on the first day, the government only accepted applications from businesses with licenses that ended in odd numbers.

Even numbers will be accepted on Wednesday.

Starting Aug. 19 anyone can apply regardless of their business license number.

Since last year, the government has spent a total of 11.8 trillion won on subsidies for 8.43 million businesses.


The latest round was in March, through which 3.85 million businesses got subsidies of up to 5 million won.

The government is also planning to announce details of the 250,000 won emergency relief grants going to most Koreans later this week, including when people can apply.

People in the top 12 percent income bracket will not be eligible.