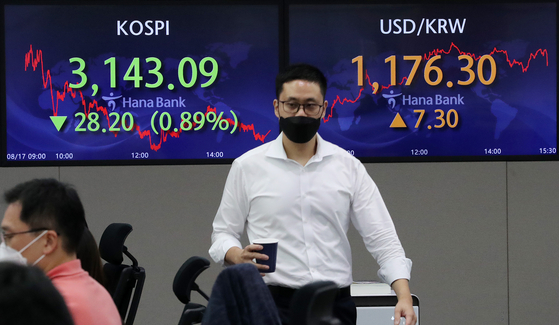 
Stocks retreated for an eighth straight session Tuesday as disappointing Chinese economic data raised concerns about a slowdown in the global economic recovery. The won fell against the dollar.

The key stock index opened with mild gains as the country's two largest chipmakers rose after tumbling on pessimism about a future DRAM prices.

Gains by financial and bank stocks, fueled by hopes of a steady economic rebound, lifted the stock index.

But stocks lost ground in the late morning as foreign and institutional selling increased on slower-than-expected growth in July in China.

Investors are seeking clues on the Fed's plan of tapering its stimulus from an address by Federal Reserve Chairman Jerome Powell, set for Tuesday.

"Investors seem to be worried about the future chip demand and possibilities of China's economic slowdown," Eugene Investment & Securities analyst Huh Jae-hwan said. "We are expecting that the Federal Open Market Committee minutes would stay close to the market consensus, without causing big ripples in the market," he added.

The local currency closed at 1,176.3 won to the dollar, up 7.3 won from the previous session's close.