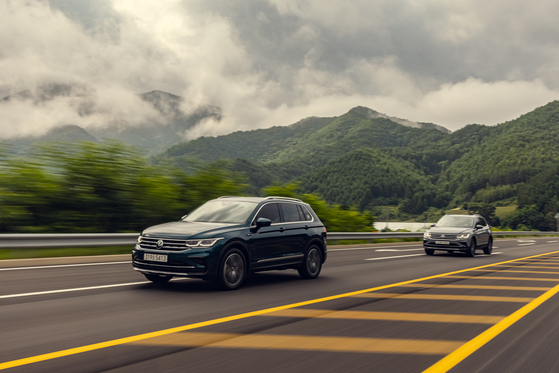 And most importantly, it’s now cheaper.

Volkswagen’s Tiguan already has a solid customer base in Korea, with 11,663 sold last year, up more than threefold from than the previous year.

It was the bestselling imported SUV last year.

The Korea JoongAng Daily recently got behind the wheel of the Prestige trim of the Tiguan 2.0 TDI with a front-drive option, driving a 40-kilometer course around Seoul.

Despite it being just a partially revamp version, the outside was noticeably different.

The front grille has gone from three slats to four slats and the fog lamps that used to be located below each headlamp were eliminated. Their function, which is mainly to illuminate the road right in front of the vehicle when visibility is limited, is now built into the main headlamps, Volkswagen Korea explains.

The LED lights inside the headlamps, which used to be more round in shape, have become more angular.

At the stern, the Tiguan lettering, which used to be placed on the left bottom corner, has been moved to the center below the VW badge with bigger fonts.

Inside, not much has been changed. A rather small 10.25-inch digital screen is placed in the center to show navigation and other infotainment functions.

The gear knob still takes the form of a stick instead of the buttons or levers that are more frequently deployed these days.

The Tiguan SUV offered a rigid driving feel, which sometimes felt too stiff, especially when driving on bumpy roads. For those who prefer more dynamic driving, the hard suspension could be a plus.

Despite its 1,696 kilograms of weight, which is 20 kilograms heavier than the previous version, the car’s handling was fairly light and agile. Making hasty U-turns or entering cornering courses at high speeds could be done easily.

The model has an EA288 evo engine, an upgrade of Volkswagen’s flagship EA288 diesel engine, which is able to generate maximum horsepower of 150 and torque of 36.7 kilogram-meter.

Its driving assistant system was packed with new features, such as Travel Assist System. Using sensors and cameras installed on the exterior of the car, the system detects the car in front and the lane sign in order to control speed while staying inside the lane. The system functions only under 210 kilometers per hour.

When parking, the center display offers a 360-degree aerial view to help secure clearer visuals around the car.

The Tiguan SUV is the first model following Volkswagen Korea’s 3A Strategy (accessible, affordable and advanced) where all trims of the model will be marked down by an average of 2 million won ($1,700).

The sticker price of its basic 2.0 TDI Premium trim will start from 40 million won, 3 million won less than its previous version. 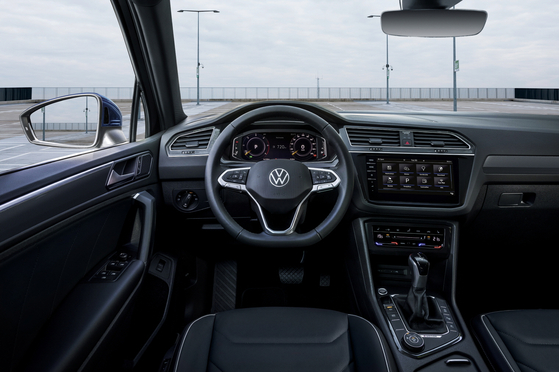