Inter Boys is a new boy band produced by online shopping mall Interpark that's yet to make its official debut. Instead of dropping its own music, the tentatively named seven-member boy band has been releasing dance covers of already well-known K-pop songs: “Back Door” (2020) by boy band Stray Kids last month, “Advice” (2021) by Taemin of SHINee on Aug. 4, “Tiger Inside” (2020) by boy band SuperM on Aug. 7 and “Dynamite” (2020) by BTS on Saturday.

In the first two dance cover videos, the members of Inter Boys appeared with their faces hidden with hats and masks, but finally revealed themselves in “Tiger Inside.”

Inter Boys' cover videos are not simple reenactments of the original choreography, but are professionally filmed on custom sets with proper costumes. 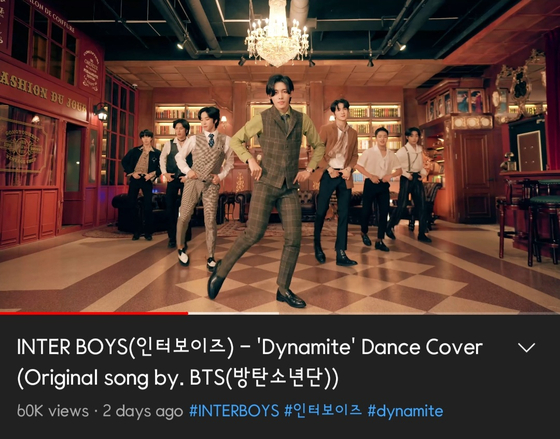 
“Inter Boys' videos may be [dance] covers of other groups, but they’re certainly not amateurs,” said pop culture critic Jeong Deok-hyun. “They actually put in the budget to build their own sets and hire professionals for the camerawork, just like other K-pop idols’ original music videos.”

Comments on Inter Boys' official YouTube channel generally praise the quality of the videos as well as the members’ performances, and expectations are building.

“After watching all these cover videos, I’m really looking forward to seeing how great Inter Boys’ original music will be,” reads a comment.

Members of Inter Boys first revealed their faces in their cover video of "Tiger Inside" (2020), originally a song by boy band SuperM. [SCREEN CAPTURE]


Inter Boys’ method of initially promoting itself with numerous dance covers of other artists may seem rather unconventional in the K-pop scene. But this approach may be more commonplace than viewers think, according to Jeong.

“Although we expect artists to debut with their own songs, Koreans are actually very familiar with artists debuting via audition shows as well,” he said. “Those programs show contestants practice and perform other artists’ songs and choreography. They prove their talents through songs that are already well-known to the public, not with their original songs from the outset. Inter Boys is basically doing the same thing.”

Similarly to how audition shows follow contestants’ training and their everyday lives, Inter Boys has also been uploading videos of themselves practicing and a vlog of a day in the life of a member. 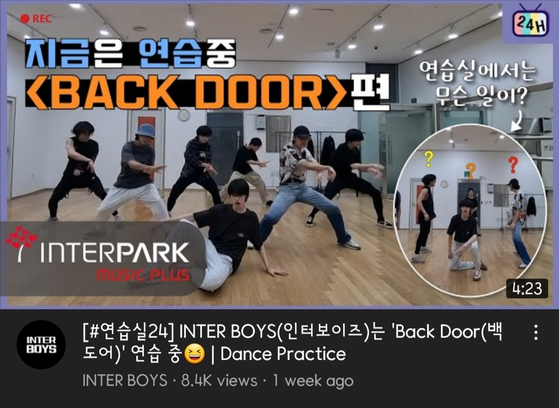 
Nonetheless, Jeong pointed out that Inter Boys is still unique in the sense that it has adopted such an approach as a legitimate boy band, not a team of contestants.

“Inter Boys’ current primary platform is YouTube, and its promotion strategy is optimal for the platform,” Jeong said. “Even if most K-pop fans don’t know who Inter Boys is for now, when they look up Stray Kids or BTS’s videos, they are likely to come across Inter Boys’ cover videos thanks to YouTube’s algorithm. If fans of Stray Kids or BTS deem that the cover video is well-made, they will compliment and support Inter Boys too, or potentially even become new fans. In that way, covers are actually more effective than original songs to promote rookies.” 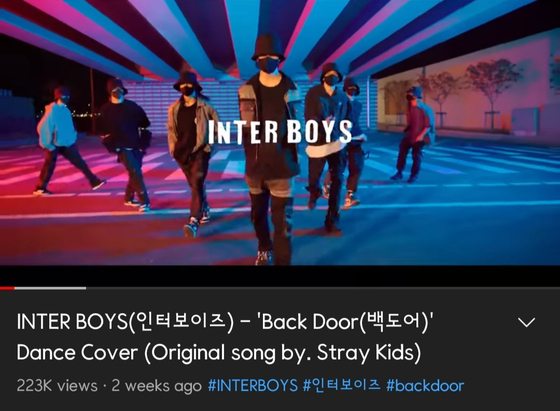 
While Inter Boys successfully caught the attention of domestic and international K-pop fans alike, one question stands out to Koreans in particular, as they are familiar with Interpark: Why is an online shopping mall launching a boy band?

“The Covid-19 pandemic significantly impacted our concert ticket sales, and we have been stuck in a stagnation in that field,” said Park Kwang-won, the vice management team director of Interpark’s subsidiary Interpark Music Plus.

“So we felt the need to create our own intellectual property and content to join the K-pop market, instead of relying solely on selling tickets. Since Interpark has many subsidiaries, we were also confident that we could create a successful K-pop group by utilizing all our networks.”


“Nowadays, it’s not strange at all even if a conglomerate like Hyundai decides to launch a K-pop idol group,” added Jeong. “Although the name ‘Inter Boys’ may sound a bit funny to Koreans because they already know of Interpark as an online mall, it sounds normal to foreign fans.

“Since K-pop and Korean cultural content are popular and profitable all over the world, most companies today want to invest in the K-pop field in some form, or produce content themselves if possible — even if the company is completely unrelated to entertainment. The line between different industries, and the line between business and culture have become blurred.”

While Interpark launched Inter Boys primarily for its ambitions to create its own cultural content, pop culture critic Kim Heon-sik says the boy band is likely to have positive marketing effects for Interpark as well. 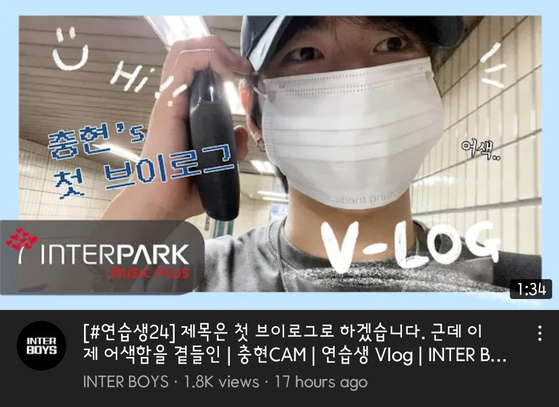 Inter Boys also uploaded a vlog following a day in the life of a member. [SCREEN CAPTURE]


“Most Koreans know about Interpark, but foreigners don’t, so there’s a very low chance of Interpark organically attracting foreign customers,” said Kim. “But once Inter Boys becomes well-known to foreign K-pop fans, Interpark will also receive some attention as the producer of the band.

“Then those fans will become aware that there is a Korean online shopping mall called Interpark and may start purchasing K-pop CDs, merchandise and concert tickets on Interpark from then on. Although it won’t be its primary identity, Inter Boys will basically be the marketing medium between fans and the shopping mall. It’s an interesting strategy on Interpark’s part to launch an idol group to promote business.”

Kim added that although Interpark is not an entertainment firm, Inter Boys still has ample potential to succeed as a legitimate artist.

“Interpark may not have as much know-how on management or artistic aspects compared to actual entertainment agencies,” he said. “But since Inter Boys members are demonstrating their talent and receiving positive reactions, things should be fine as long as Interpark refrains from becoming too marketing-oriented with the band.”