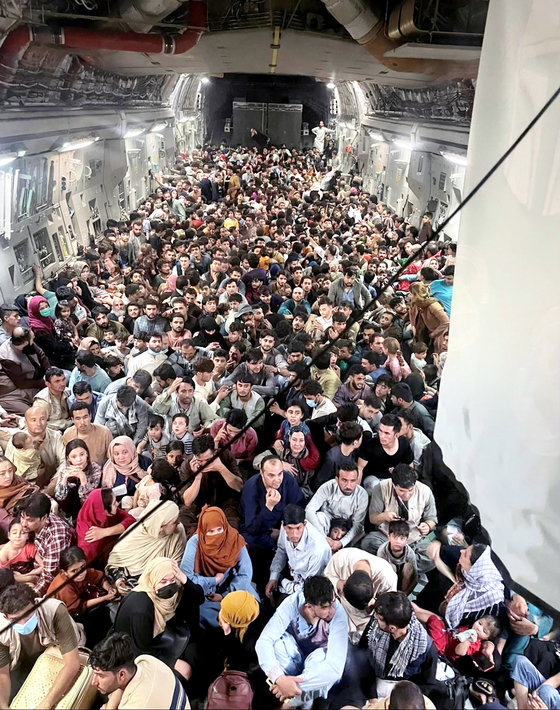 Evacuees are seen inside a U.S. Air Force C-17 Globemaster III transport aircraft, which carried some 640 Afghans to Qatar from Kabul, Afghanistan on Aug.15. [REUTERS/YONHAP]

The last Korean citizen in Afghanistan left Kabul Tuesday morning on a plane to a country in the Middle East, with the final group of diplomats from the Korean Embassy in Kabul.

Korea’s Foreign Ministry confirmed Tuesday that the flight carrying the one Korean national, a businessperson, and three diplomats, including Korean Ambassador Choi Tae-ho, took off around 4:30 a.m. from Hamid Karzai airport in Kabul.

“We have confirmed that they have landed safely in a third country,” said Choi Young-sam, spokesperson for the Foreign Ministry, in a press briefing on Tuesday.

Since Sunday, much of the Hamid Karzai airport, especially the civilian side, was overrun with crowds trying to leave the country after the Taliban swept through Kabul.

The Korean national, who ran a type of business in Afghanistan for years, Ambassador Choi and two other Korean diplomats were reported to have stayed either at the airport or in its vicinity for a number of hours from Monday evening to early Tuesday morning, waiting to get out on a flight.

Though Choi did not confirm whether they flew out on an American plane – U.S. forces have secured a part of Hamid Karzai airport – it is likely that they did given that Korea and the United States signed an agreement earlier in the year granting Korea access to American military assets for emergency evacuations of its nationals.

“There were obviously some complications in trying to fly out of Kabul because the situation at the airport was constantly changing,” said a ministry official. “We understand that they were waiting for the flight for hours amid changing situations.”

Photos of some 640 Afghans crammed onto a U.S. Air Force jet designed to carry a sixth of that number were published by international media Tuesday. Videos from the moment the jet took off from the Kabul airport showed people trying to hold onto the plane’s exterior, surrounded by crowds running on foot.

It wasn’t immediately clear if the Korean businessperson would return to Korea or not. The Korean was the last person registered with the Korean government remaining in Afghanistan. No Korean citizen can travel to Afghanistan without government approval. Travel to the nation has been banned since 2007.

As for the diplomats, including Ambassador Choi, they are to continue their work in a Middle Eastern country for now, according to the Foreign Ministry.

“We have no knowledge of any plans by the ministry to call them in right now,” said a ministry official. “They will stay on in a third country and continue to work there.”

The work of the Korean mission to Afghanistan has been assumed by the Korean Embassy in Qatar since the embassy decided to shut down temporarily Sunday.

The Korean government has not made an official announcement on how it will communicate with the Afghan government in the future.

“The Korean government has adhered to the principle of always cooperating with countries that respect human rights and abide by universal international norms,” said an official when asked about the Korean government’s position toward the future government in Afghanistan. “While closely monitoring the current trends in Afghanistan, and the policies of our allies, our position is that once a level of security on the ground can be secured, we may re-open our diplomatic mission in Kabul.”

The Korean government, with the U.S. and other foreign governments and international organizations, had committed to rebuilding Afghanistan's physical and governance infrastructure and systems.

"The efforts to support reconstruction in Afghanistan were efforts made not only by the Korean government alone but also with many others in the international community," said Foreign Ministry spokesperson Choi. "We will continue to assess the situation in Afghanistan."