Hong Joon-pyo of the PPP takes another shot at presidency

Hong Joon-pyo of the PPP takes another shot at presidency 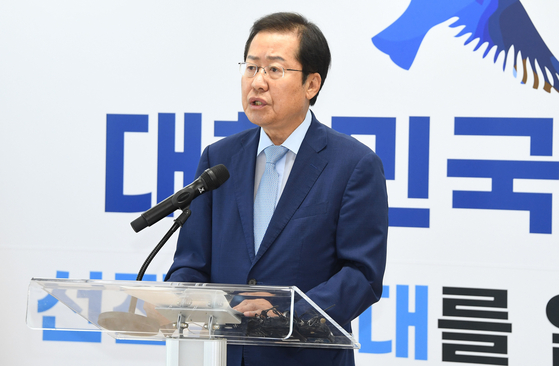 Sixty-six-year-old Hong previously ran in the 2017 presidential election as a candidate from the Liberty Korea Party — predecessor to the current main conservative party — against President Moon Jae-in, but lost.

While declaring his intention to run for the presidency a second time in an online press conference Tuesday, he pledged to "correct the course of a nation heading in the wrong direction."

He promised that if he were to be elected, Korea would win international respect by becoming a "proud member" of the Group of Seven, or G7, industrialized nations and becoming a prosperous country.

Hong also took direct aim at the Moon administration for pursuing "populist" government welfare programs. He created a dire image of ballooning government debt, the burden of which he said would be passed onto future generations.

Entering a growing field of candidates from the conservative opposition, Hong argued that only a candidate "without a blemish" on their record would be able to secure a victory that would overturn the current government dominated by the ruling Democratic Party (DP).

The comment appeared to be a veiled criticism of former prosecutor general and leading conservative presidential contender Yoon Seok-youl, whose family's private affairs have come under intense scrutiny in recent weeks, and other primary rivals within the PPP.

"My family and I have been thoroughly vetted by the government and the public over the course of my past political career," Hong said, putting forth the argument that he is the best-prepared and consistent presidential candidate to represent the conservative bloc.

Hong quit the main opposition party, then named the United Future Party, in March last year after it disqualified him from running for the 2020 National Assembly election on the party's ticket.

He consequently ran as an independent and won a seat on the legislature representing a constituency in Daegu, a conservative stronghold.

The PPP's Supreme Council re-admitted Hong to the party in late June, as he made it clear he intended to run for the presidency again on the main opposition ticket.

Hong is best known for his straightforward remarks and political attacks. He served as the governor of South Gyeongsang from December 2012 to April 2017, when he ran for the first snap presidential election following President Park Geun-hye's impeachment and removal from office.

Hong also previously served as a floor leader and a member of the supreme council of the Liberty Korea Party.

All politics is local now more than ever (KOR)

All politics is local now more than ever

The people are watching