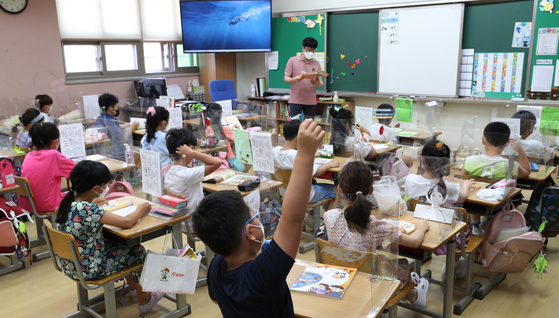 Students attend a class at an elementary school in Suwon, Gyeonggi, on Tuesday, as schools nationwide reopened after the summer break. [NEWS1]


The U.S. drugmaker Moderna pledged to expand and speed up shipments of Covid-19 vaccines after leaving Korea in the lurch this summer.

Whether Moderna vaccines bottled by Samsung Biologics locally can be used here, however, remains unclear.

“Moderna apologized for the difficulties caused by its supply disruption to the Korean government and its people,” Second Vice Health Minister Kang Do-tae said during a briefing Tuesday.

After two delays in a shipment of Moderna vaccines due in late July, the U.S. pharmaceutical company informed Korea that it would deliver less than half the 8.5 million doses planned for August due to production problems.

Moderna is the main supplier of vaccines for Korea in the third quarter along with Pfizer.

Because of the unexpected shortages, the government temporarily extended the interval between two doses of mRNA-based vaccines — Moderna or Pfizer — from four to six weeks, causing delays for people waiting for their second shots.

According to the health ministry, the Korean delegation had a three-hour meeting with eight Moderna representatives, including Chief Commercial Officer Corinne Le Goff.

“Moderna explained the cause of the disruption and explained that the problem is almost fixed,” Kang said.

“To restore trust with Korea, Moderna has pledged to put utmost efforts to provide more vaccines to Korea than it already promised [for August and September] and move up the delivery for September,” said Kang.

However, the delegation did not get a detailed confirmation of shipment amounts or schedule. Moderna is supposed to give those details before the end of this week.

As to whether Moderna vaccines being bottled locally by Samsung Biologics can be made available in local clinics, the consultation ended inconclusively.

Samsung Biologics has signed deals to do bottling and packing of Moderna vaccines at its Songdo plant in Incheon, starting from the end of August.

"We suggested that it is desirable for supplies domestically produced [...] to be supplied to Korea,” Kang said.

“Considering the considerable period of time needed for procedures [...] we decided to continue to hold discussions [with Moderna],” he added.

Despite the delays, health authorities remained confident of giving at least one vaccine dose to 70 percent of the population by the Chuseok harvest holidays in mid-September and fully vaccinating 70 percent by the end of October.

“In the face of a global shortage of vaccines, we are working on a variety of methods, including vaccine swaps and overseas donations, to ensure a more stable vaccine supply,” Jung Eun-young, head of the country’s vaccine introduction task force.

The Korean government signed a vaccine swap deal with Israel on July 6 and procured a total of 782,000 Pfizer vaccines. 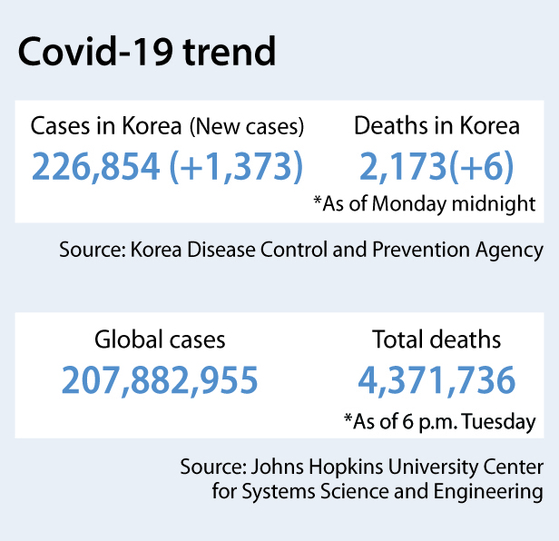 Of the new cases, 1,323 were locally transmitted and 50 came from overseas.

As the country is grappling with a shortage of sick beds, Ulsan decided to use a hotel in its downtown as a residential treatment center for Covid-19 patients with mild symptoms.

Seoul and Busan have been using hotels as makeshift hospitals since the early days of the pandemic last year.

The proportion of Delta cases in all local Covid-19 infections from Aug. 8 to 14 came to 85.3 percent, up sharply from 73.1 percent a week earlier.

Patients in critical condition numbered 354 on Monday, staying in the 300s for 18 days in a row.