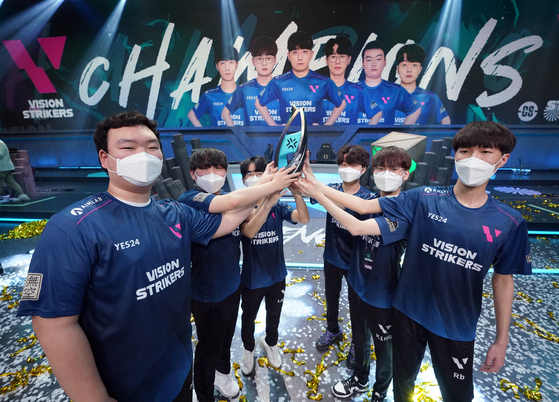 Vision Strikers pose for the cameras with their newest trophy in hand. [RIOT GAMES]

The match played on Sunday at the Afreeca Colosseum in Lotte World was in some sense a victory lap for both teams, as they had already secured their ticket to the Stage 3 Masters event to be held in Berlin.

However, the two teams' history — earlier this year, F4Q put an abrupt stop to Vision Strikers' 102-match win streak, smashing their façade of invulnerability — ensured that a bit more than a regional trophy and some extra prize money would be on the line.

The first map, Icebox, was a complete romp for Vision Strikers, with Kim "MaKo" Myeong-gwan putting on a clinic with Viper and most of his teammates taking turns popping off mechanically. F4Q's oddly carefree demeanor throughout the beatdown, however, suggested they might have deliberately chosen to not prepare for the map, and were fully expecting a blowout of this kind.

Things changed dramatically in the next map, Split. F4Q came back with a vengeance from the get-go, taking VS all the way to 10-1 before finally starting to drop points. VS did redeem themselves quite a bit after the change of sides, clawing back to 10-7, but the margin proved too large to overcome and F4Q closed out 13-9.

Kim "Lakia" Jong-min of Reykjavik fame was subbed in for the third map, Bind, on which he had been maintaining a 100-percent win rate this season. With Goo "Rb" Sang-min leading the way on Raze with a whopping six first kills and zero first deaths, VS comfortably took a 13-5 victory to reach match point.

Having completed his Bind specialist duties, Lakia switched back out and Lee "k1Ng" Seung-won returned for the fourth map, Ascent. Despite F4Q's Jeong "Esperanza" Jin-cheol and Kim "zunba" Joon-hyuk continuing to put up respectable resistance, VS maintained their momentum and closed out 13-5 to put an end to the series.

Both teams showed admirable camaraderie by congratulating and consoling each other throughout the wrap-up ceremonies. While F4Q were indeed disappointed to have lost, no bitterness was in the air; at one point, their players even mock-celebrated an imaginary win by lifting up and waving around Vision Strikers' new trophy, cracking up the production staff behind the cameras. F4Q were not entirely bereft of silverware, either, thanks to Esperanza winning tournament MVP despite having lost the finals.

In the post-finals press conference, VS head coach Pyeon "termi" Seon-ho said he was elated that his team "returned to the throne" after having been usurped in the past season, although he was slightly miffed that they missed out on a lossless tournament victory by losing on Split. Prior to the finals, Vision Strikers had not dropped a single map.

Vision Strikers and F4Q will represent Korea at Verti Music Hall in Berlin starting from Sept. 9.