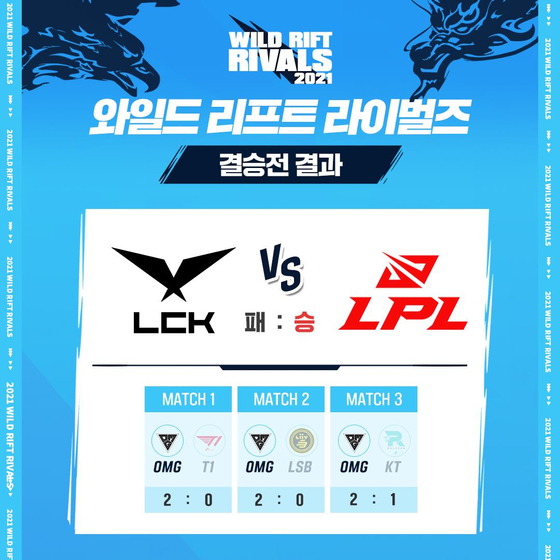 
The Wild Rift Rivals 2021: LCK vs. LPL Invitational ended last Saturday. All four days of the competition made it painfully clear that as of now, Korea is miles behind China in the new esport.

Wild Rift, the mobile adaptation of League of Legends, has recently begun taking steps to establish itself as the "first truly global mobile esport" by "focusing efforts [first] at the professional level."

Last week's tournament was meant to be a mobile revival of Rift Rivals, the annual inter-regional League of Legends event that did much to build and highlight rivalries between geographic neighbors before it was discontinued in 2020. It was one of the first instances of official interregional play between professional teams.

Over the first three days of the tournament, each LCK team played one best-of-three against an LPL team — alternating opponents every day — for a total of nine matches. Out of the nine, China won eight.

Korea did narrowly avoid going winless in the round robin, thanks to KT managing to take down BLG 2-0 on Friday. Still, the skill difference between the two regions was glaringly obvious and reflected in China's aggregate set score of 16-4 — most of the best-of-threes were not even close.

On Saturday, a best-of-five finals using a winner-stays-on format was played. LCK chose to lead off with T1; LPL responded by sending out OMG.

OMG proceeded to go on a singlehanded demolition job, taking down both T1 and LSB 2-0. Last-up KT fared slightly better, winning one game, but it was not enough; OMG still came back to win it 2-1 and secure the LPL its first Wild Rift Rivals trophy.

While this result may be disheartening for those who were more optimistic about LCK's competitive prospects in Wild Rift, it should be noted that China has long been an international powerhouse in mobile esports, while the same could hardly be said for Korea.

Much may change in the future, of course. Wild Rift as a game is still very much in its infancy, and its esports scene even more so; this invitational was the first time any professional Korean team participated in an official tournament.