Son Heung-min named to Alan Shearer's team of the week

Son Heung-min named to Alan Shearer's team of the week 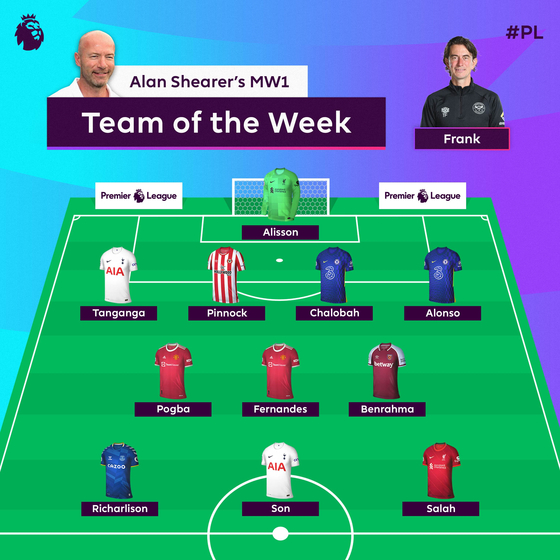 Son's inclusion isn't a big surprise. The Korean striker scored the sole goal in Spurs' 1-0 victory over reigning Premier League champions Manchester City on Sunday. Son's winner came in the 55th winner, a beautiful low shot from just outside the box that cut through the defenders and past City goalkeeper Ederson.

Shearer, a Premier League legend and one of FIFA's 100 greatest living footballers, placed Son up front alongside Mo Salah of Liverpool and Richarlison of Everton.

Tottenham's Japhet Tanganga made it into defense, alongside Ethan Pinnock of Brentford and Trevoh Chalobah and Marcos Alonso of Chelsea. Alisson of Liverpool was named in goal.

Son is a fairly regular pick on the various Premier League teams of the week, but his inclusion so early in the season is a very good sign, both for the Korean star and for Tottenham.

Spurs are starting the season under new manager Nuno Espirito Santo without Harry Kane, who is still under contract with the club but has repeatedly made it clear that he wants to leave. As issues surrounding Kane continue to overshadow the club, Son's ability to step into the gap and continue to produce despite the sideshow will be a big relief for Nuno, the players and the fans.