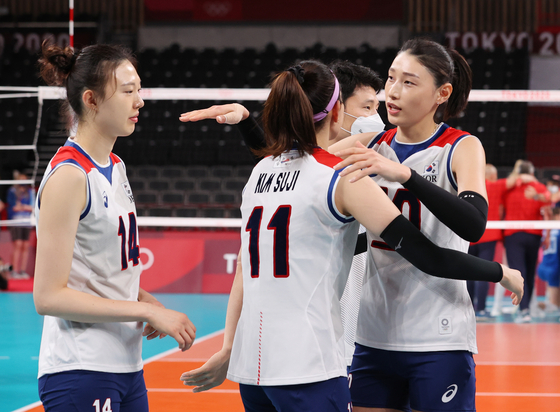 "It is right for me to step down now and let younger athletes prepare for the next Olympics," Kim Su-ji told Yonhap on Saturday. "I haven't thought in detail about other international games yet."

Despite being a veteran player who represented Korea at the 2016 Rio Games, Kim Su-ji struggled to prepare for the Tokyo Games as she was coming back from an injury.

Kim Su-ji and Kim Yeon-koung have played together on the national team for years, but their partnership goes back a lot further. The two met Ansan Seo Elementary School, where they both started playing the sport. They grew up together, attending the same middle and high school.

"The only thing that has changed from when she was in elementary school is her height," Kim Su-ji said about Kim Yeon-koung. "How she takes care of people and play pranks on people is the same."

After sharing more than two decades of volleyball together, they are now retiring from the national team. Kim Yeon-koung officially retired on Aug. 12. 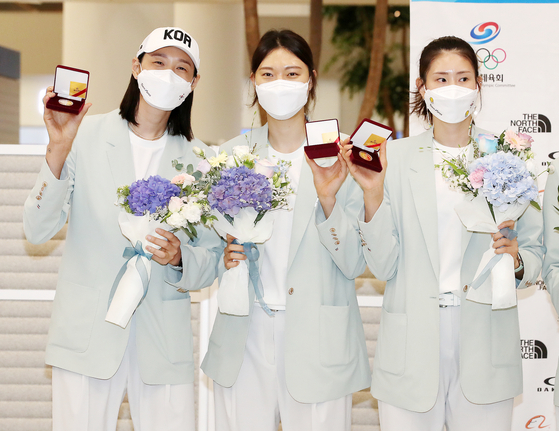 From left, Kim Yeon-koung, Yang Hyo-jin and Kim Su-ji pose for a picture after arriving back in Korea after the 2020 Tokyo Games on August 9. [NEWS1]


Yang Hyo-jin, who appeared alongside Kim Yeon-koung in Tokyo, Rio and London 2012, also indicated that she was stepping back from the national team.

"After the bronze medal match, it felt so strange to think that I was retiring from the national team," Yang told News1 on Monday.

Yang not only played beside the captain throughout all three Olympics, but they also share memories as roommates.

"When I think of our team I get emotional," Yang continued. "There were good times, but I think most of the time, we fought through the hard times together."

Kim Su-ji and Yang will continue to play for their respective V League clubs, IBK Industrial Bank and Hyundai Hillstate.