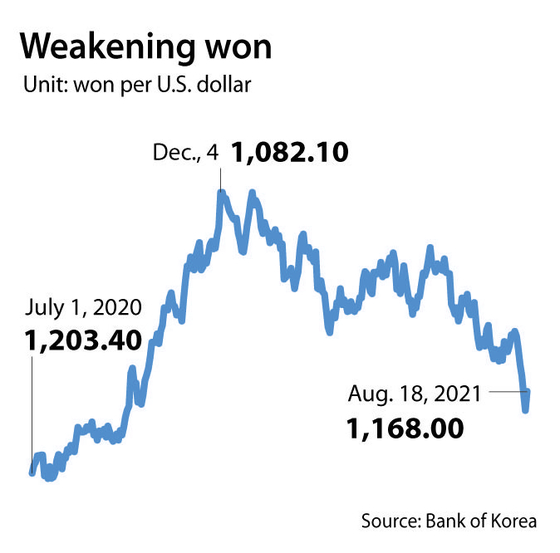 According to Korea Exchange on Wednesday, foreign investors net offloaded 7.9 trillion won ($6.8 billion) worth of shares on Seoul's main bourse. They have been net selling for seven trading days, from Aug. 9 through Wednesday.

The massive selling took its toll on the bourse. The Kospi had been falling for eight trading days until it managed to rebound slightly by 0.5 percent on Wednesday to close at 3,158.93.

On reasons foreign investors are picking on local chipmakers, analysts said they may be reacting to slowing consumption growth globally.

"If you look at consumption data in the U.S. through June, service consumption improved but goods consumption growth slowed down," said Choi Ik-jae, analyst at Hi Investment & Securities. "Investors seem to have dumped semiconductor shares preemptively as the global resurgence of Covid-19 and fading effects of stimulus checks in the U.S. could pull down demand for IT devices."

Retail sales in the United States dropped more than expected in July, falling 1.1 percent from a month earlier.

China's retail sales and industrial output also grew slower than expected last month, affected by heavy rains and the spread of the Delta variant of the coronavirus.

"Concerns about a global economic slowdown have surfaced again, making investors prefer safer assets," said Kim Yoo-mi, an analyst from Kiwoom Securities. "With expectations that the U.S. Federal Reserve will still go ahead with tapering of asset purchases, the U.S. dollar has been strengthening."

With investors looking for safer assets and massively dumping Korean stocks, the Korean won has been weakening. The Taliban's takeover of Afghanistan also drove up the U.S. dollar.

On Tuesday, the local currency closed at 1,176.30 won against the greenback, up 0.6 percent compared to the previous trading day. The won closed at its weakest in 11 months since 1,179 won per dollar on Sept. 15.

On Wednesday, Seoul's currency closed at 1,168 won per dollar, down 0.7 percent compared to the previous session's close. It was the first time in seven days that the won strengthened against the dollar.

"It seems that the won is weakening largely because foreigners have been acquiring dollars to transfer their gains from offloading local stocks to their home country," an official from the Finance Ministry said Wednesday morning. "The exchange rate fall is problematic as it seems like overshooting, not simply due to latest supply and demand of foreign currency."

While that comment did not indicate whether the ministry would step in, the won reversed course later in the day.

"The Kospi was able to stay above the 3,150-mark [on Wednesday] as some investors came back to Asian stock markets and the won reversed its weakening, but the stock market lacks momentum [to grow,]" said Choi Yoo-joon, an analyst at Shinhan Investment. "Still, excessive dumping by foreign investors and the speed of the won's weakening are likely calm down."