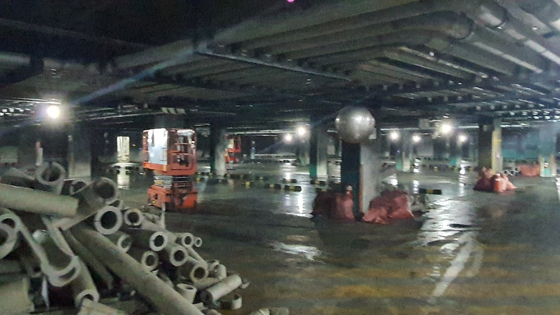 A fire broke out in an underground parking garage in Buldang-dong, Cheonan in South Chungcheong at around 11:09 p.m. on Aug. 11, damaging more than 600 cars. [SHIN JIN-HO]

A fire in an underground parking garage in Buldang-dong, Cheonan, caused an estimate 10 billion won ($856 million) in damage.

The fire broke out on Aug. 11 when a Hyundai Starex caught fire in the second basement level of an apartment in Buldang-dong, South Chungcheong, at around 11:09 p.m, according to the Chungnam Fire Service Headquarter.

The van was owned by a car cleaning company, and the fire started when one of its employees, a man in his 30, was lighting a cigarette and a liquefied petroleum gas (LGP) cylinder in the vehicle exploded.

It took three hours to extinguish the blaze. No one was hurt, but more than 600 cars were damaged.

Total damage could be more than 10 billion won as many luxury cars were involved in the fire. Of damaged cars, one-third are reported to be imported, and 100 were Mercedes-Benz vehicles.

The blaze started after a Starex caught fire. A man in his 30s, a worker for a car cleaning company, was in the car when it caught fire. The man is reported to have said that the explosion began when he was about to light a cigarette. A liquefied petroleum gas cylinder was in the back seat of the Starex. [JOONGANG PHOTO]


The Starex itself was only insured to cover 100 million won of liability, according to multiple media outlets.

About 390 firefighters and 50 vehicles were mobilized to extinguish the blaze. The Starex driver was taken to a nearby hospital immediately and treated for second-degree burns, while 14 apartment residents were treated for smoke inhalation.

The Chungnam Fire Service Headquarter, the Chungnam Provincial Police Agency, the National Forensic Service and the Korea Electrical Safety Corporation are jointly investigating the case to find out the exact cause of the fire.