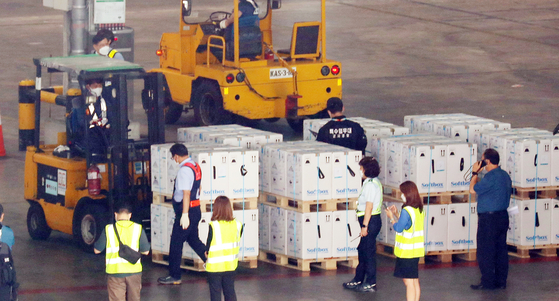 Workers unload boxes carrying 1.6 million doses of Pfizer's Covid-19 vaccine, which the government has secured under a direct contract with the pharmaceutical giant, from a chartered plane at Incheon International Airport on Wednesday. [NEWS1]


Health authorities are once again urging people to get vaccinated as Korea's daily new coronavirus cases rose back into the 1,800s on Wednesday following the three-day Liberation Day weekend.

The country registered 1,805 new Covid-19 cases, up 433 from the previous day, raising the total caseload to 228,657, according to the Korea Disease Control and Prevention Agency (KDCA).

Virus case numbers usually rise around two days after weekends on Wednesday due to fewer tests conducted on weekends. However, as the extended Liberation Day holiday ran until Monday, health officials expect this week’s peak to be reflected in Thursday's statistics.

Of the new cases, 1,767 were locally transmitted and 38 came from overseas.

Infections outside the capital region accounted for the remaining 37.4 percent, including 123 in Busan, 104 in South Gyeongsang, 70 in South Chungcheong, 61 in Daegu and 45 in Jeju.

The number of critically ill patients numbered 366 on Wednesday, staying in the 300s for the 19th day in a row.

The number of these patients contrasts with the number of currently available sickbeds, standing at 144 nationwide, and 285 vacant I.C.U. beds.

Five more deaths were reported, bringing the death toll to 2,178.

Despite being subject to the toughest level of virus restrictions, the KDCA said the population movement based on mobile GPS data in the greater Seoul area over the past week from Aug. 9 to 15 rose 4.1 percent from the previous week.

Authorities expressed concerns over the increased movement of people over the holiday weekend, and urged people to get tested if they visited a crowded site during vacation or show symptoms after returning home.

With the first round of vaccination reservations for people between 18 to 49 wrapping up Thursday, Prime Minister Kim Boo-kyum urged those in their 40s and younger to get vaccinated against Covid-19.

“The number of serious cases involving unvaccinated young adults has been on the rise recently,” Kim said. “Getting inoculated not only reduces the risk of infection but also sharply lowers the possibility of hospitalization and death.”

Anyone who misses their chance to book a vaccine from the initial 10-day reservation period based on the last digit of their birthday will be able to try again from Thursday to Sep. 18.

In the second round, those aged 36 to 49 can make reservations from 8 p.m. Thursday to 6 p.m. Friday, while those 35 and younger can apply for vaccines starting 8 p.m. Friday until 6 p.m. on Saturday.

From 8 p.m. Saturday, all eligible persons can make or change their reservations until 6 p.m. on Sept. 18.

While the current level of social distancing is scheduled to end Sunday, new distancing rules will be announced on Friday, and they appear likely to be extended.

The greater Seoul area has been under the highest level of restrictions in the four-tier system for over a month, which includes a ban on gatherings of more than two people after 6 p.m.

Other regions outside the capital area are under the second-highest level, which bans gatherings of more than four people throughout the day, while some regions such as the southeastern port city Busan and the resort island Jeju have adopted the strictest level.