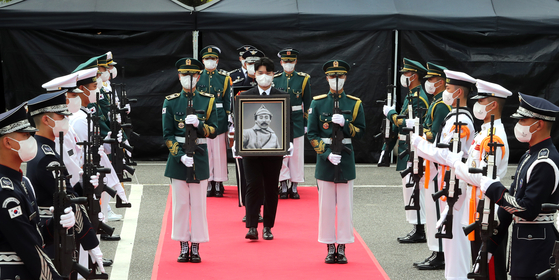 The remains of Hong Beom-do, a revered Korean independence fighter who died in Kazakhstan 78 years ago, arrive in a flag-draped casket for his burial ceremony attended by President Moon Jae-in, First Lady Kim Jung-sook, party leaders, ministers, diplomats and other dignitaries Wednesday morning at the Daejeon National Cemetery. [YONHAP]


Some 78 years after his death, Hong Beom-do, a revered Korean freedom fighter whose remains were repatriated from Kazakhstan three days ago, was buried at a national cemetery in his home country Wednesday.

Among some 30 dignitaries attending the small-scale ceremony due to Covid-19 restrictions were Song Young-gil, chairman of the ruling Democratic Party (DP), Lee Jun-seok, chief of the main opposition People Power Party (PPP), other minor party leaders, heads of civic groups related to Hong and representatives of ethnic Koreans living in Kazakhstan.

Gen. Hong (1868-1943) served as a commander of the Korean Independence Army during Japan's 1910-45 colonial rule. He is especially known for his heroics leading the Korean independence troops to victory in the Battle of Fengwudong against Japanese forces in Manchuria, currently located in Jilin Province in northeastern China, in June 1920. This battle is considered the first major victory in Korea’s struggle for independence from Japan which swung into motion with the March 1 Movement of 1919. He also led the Korean Independence Army in the Battle of Qingshanli in Manchuria in October later that year.

Enemy troops gave him the moniker of “the Flying General” because of his ability to emerge seemingly suddenly after covering great distances in battle.

Hong moved to Primorsky Krai, or the Russian Far East, the following year and lived there until he was required to relocate to Kazakhstan due to Soviet leader Joseph Stalin's forced deportation of some 170,000 ethnic Koreans in 1937. He later contributed to the development of the ethnic Korean community in Kazakhstan, called Koryoin.

Hong died at the age of 75 in Kazakhstan on Oct. 25, 1943, and was buried at a cemetery in Kyzylorda, a southern city in the Central Asian country.

On Tuesday, Moon posthumously awarded Hong the Order of Merit for National Foundation, the highest honor, in a ceremony attended by Kazakh President Kassym-Jomart Tokayev during his state visit to Korea.

Hong previously received the Presidential Medal of the Order of Merit for National Foundation in 1962.

A wake was held for Hong at the Daejeon cemetery over Monday and Tuesday, and people could pay respects both on-site and virtually. 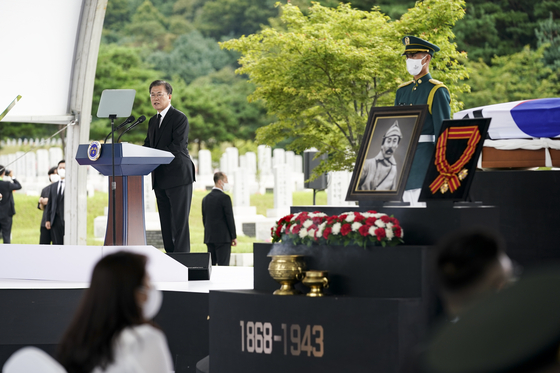 
President Moon in his eulogy at the funeral ceremony Wednesday marked Hong’s homecoming 101 years since the battles of Fengwudong and Qingshanli, calling the general “a hero and the pride of all our people.”

Moon recalled that the Provisional Government of Korea, established in the spirit of the March 1 Independence Movement, declared the battles in 1920 as “the first great victory of the war of independence.”

He continued, “The hardships faced by our Korean compatriots, including the general, who had to leave their homeland for Manchuria, the Russian Far East and Central Asia, are embedded into the adversities faced by our people in modern history.”

Moon added, “The tears shed by the general on the soil of his home country will lead the Republic of Korea to become an even stronger, more blazing country.”

There was a moment of silence to pay respects to Hong.

Actor Cho Jin-woong, who serves as a public relations ambassador for Hong's memorial foundation and was a part of the special delegation to Kazakhstan, served as M.C. of the ceremony.

Singer Ha Hyun-sang gave a tribute performance, singing “Becoming the Wind,” from the soundtrack of hit 2018 Korean drama “Mr. Sunshine,” which focuses on activists fighting for Korea's independence from Japan. 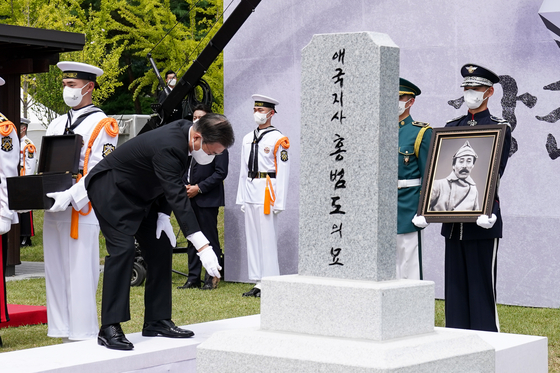 
Afterwards, Hong’s coffin was moved to the burial site in a procession led by the president and the first lady.

The Taegeukgi, or Korean national flag, that had been draped over Hong’s coffin was handed by Moon to Rep. Woo.

Hong’s remains were buried at the cemetery with some soil from Kazakhstan sprinkled over it, delivered by President Tokayev the previous day.