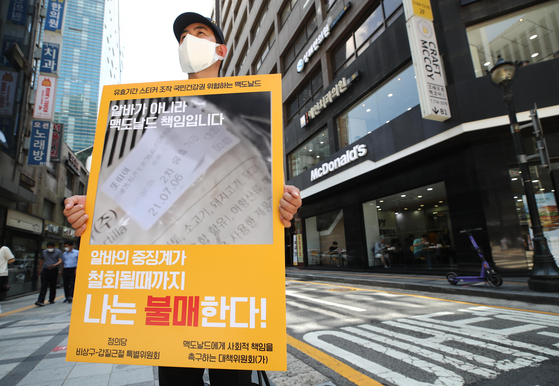 Park Chang-jin, vice chairman of the Justice Party, holds a one-man protest on Aug. 9 outside a McDonald’s in Jung District, central Seoul, urging a boycott of the company. [YONHAP]


Police questioned a representative of McDonald's Korea over whether an outlet used less-than-fresh buns and tortillas.

An unidentified representative was summoned to the Gangnam Police Precinct to answer questions on whether McDonald's franchises condoned violations of the Food Sanitation Act. Neither the police nor the company would say Tuesday who was questioned or when the questioning took place.

Yonhap News reported that the company's CEO was questioned.

This follows a tip-off by a whistleblower working in a Seoul McDonalds, who released a video showing a package of hamburger buns with an expiration date sticker with one date on top of a sticker with an earlier date.

The video was made public Tuesday evening by KBS.

In the video, the sticker on top showed the buns were good through 5 a.m. Jan. 3. The sticker underneath had a different expiry time: 7:14 a.m. on Jan. 2.

“Newly printed [expiration date] stickers were usually put on top [of an old sticker] while [the store] prepared ingredients to use the next day,” said the whistleblower, according to a report from edaily, a local media outlet.

The whistleblower added that “part-timers were forced to obey orders because they were made by the managers.”

The tip-off was examined by the Anti-Corruption and Civil Rights Commission, which turned the case over to the police on Friday.

McDonald’s Korea issued a statement on Aug. 4 admitting that an internal investigation found the allegation was true and apologized.

“An internal investigation discovered cases in which expiration date stickers were reprinted and put on top,” the company said in a statement.

The company claimed that the new stickers were not intended to extend the use of ingredients beyond the date when they could be safely used in food.

“McDonald’s voluntarily sets [expiration dates] earlier to make sure the ingredients are of better quality,” the company said.

The police said they will review whether expiration regulations under the Food Sanitation Act were violated by the fast-food chain, which claims its own internal guidelines are more strict.

The company’s response to the scandal included a three-month suspension of a part-timer involved in re-labeling the buns, which sparked outrage in some quarters.

Park Chang-jin, vice chairman of the Justice Party, held a one-man protest on Aug. 9 outside a McDonald’s in Jung District, central Seoul, urging a boycott of the company.

Holding a placard that read, “The responsibility lies with McDonald’s, not the part-timer,” the politician urged the lifting of the punishment on the employee.

His sentiment was echoed by part-timers with experience working at McDonald’s.

One writer in an online community for part-timers said that the demands of working at McDonald’s, combined with the small number of staff at each branch, made it virtually impossible to abide by the expiration dates.

“One part-timer prepares over 15 menu items. When there is a backlog of orders, it’s hard to find a single franchise that doesn’t violate ingredient expiration dates.”