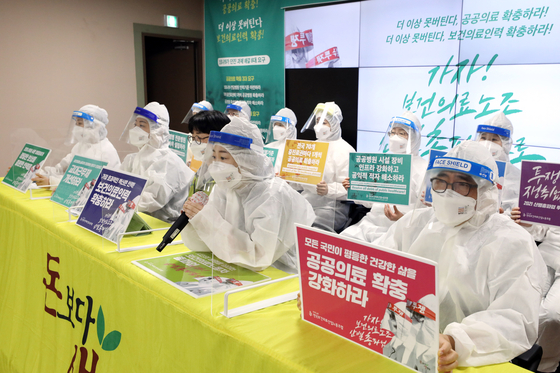 Members of the Korean Health and Medical Workers’ Union hold a press conference concerning government support for 134 medical institutions at the Korean Health and Medical Workers’ Union office in Yeongdeungpo District, western Seoul, on Wednesday. During the press conference, union members said that the health workers cannot keep up with K-quarantine. They demanded basic necessities for a better work environment such as more manpower in the public health centers. If the government does not implement real solutions, the union said that they will go on strike on Sept. 2. [NEWS1]


Many exhausted public health workers on the front lines of the Covid-19 pandemic are leaving their jobs or taking long-term leaves.

Public health workers include not only doctors and nurses but also the administrative staff at health centers.

The data comes from a Ministry of Security and Public Administration report made public on Sunday by Rep. Ko Min-jung of the ruling Democratic Party, who is also a member of the National Assembly's Health and Welfare Committee.

"Some workers who are already on leave extend it, with others even registering for voluntarily resignation," said a worker at a public health center in Seoul.

The reasons for the exodus are long overdue for a government intervention: Public health workers are overworked and underpaid.

The workers say that the initial chaos is gone, but they are still struggling with a lack of manpower. And, although the government did hire more people, most of them are part-time workers.

"The government did hire more employees, but they are mostly part-timers who leave after a couple months," said an official of the Korean Government Employees' Union. "So, even though the number of workers increased, our workload hasn't changed."

Moreover, public health workers are currently subject to the 57-work-hour system which limits the extra work hours employers can compensate workers for at four hours overtime per day and caps the total extra working hours per worker at 57 per month.

But workers often work much longer than the compensated four hours of daily overtime.

"This standard was made before the pandemic, when everything was predictable," said Chonnam National University department of administration Prof. Kim Ho-kun.

"The situation has drastically changed since then due to Covid-19, so the rules need to change accordingly to fairly compensate the workers."

In addition, the workers decry the lack of respect they receive from the government.

While public health workers are on the front lines of the pandemic, they are not considered employees of essential services eligible to receive early vaccine shots.

"We deliver quarantine notices and self-diagnosis kits in person. I don't know why we are not included in the vaccine priority group," read one comment on an online community of public officials.

Another comment read, "The government rejected our request for early vaccination saying that it won't look good to the public."

The Korean Government Employees' Union has consistently requested early vaccination for the public health workers. They have directly discussed the matter with the Ministry of Security and Public Administration, but no changes have been made thus far.

Public health workers are also last to know, first to go: Instead of notifying the public health workers of any changes to the restrictions through an official letter of cooperation, the government often releases new quarantine guidelines on the internet first.

Thus, workers are unprepared for the wave of civil complaint calls about the changed quarantine guidelines.

People on the line then often swear or yell at the workers for their lack of knowledge.

"We know that the government released information online without telling us when the phones go off like crazy," said a public official.

As the pandemic drags on, so does the workers' frustrations. Many workers face burnout and depression.

Some 33.4 percent of public health workers reported to be prone to depression, according to research conducted by the Central Disaster and Safety Countermeasures Headquarters from June 23 to July 9.

This number is significantly higher than the 18.1 percent of average citizens who report to be prone to depression.

Furthermore, 19.9 percent of public health workers stated that they experienced suicidal thoughts. This is 7.5 percent higher than that of average citizens.

"I work throughout the night, even on the weekends," said a fourth-year public health worker. "I have to face frustrated and angry people filing civil complaints both face-to-face and on the phone. Some of us attend therapy because of this. Many of my colleagues are considering a leave of absence or even quitting."

"We demand that the government hire more full-time workers, give them compensatory pay for overtime and cover travel expenses to make a safe and respected workplace environment," said a member of the Korean Government Employees' Union.

The union predicts that such a harsh work environment will also keep potential applicants away from the job.

The cries of overworked public health workers have been present since the beginning of the pandemic. In May, a nurse in Busan took her own life after being overworked.

Nonetheless, the problems persist as Covid-19 drags on.

"The most devastating part for the workers is that they don't know when this will all end," said a member of the Korean Government Employees' Union.

Many Covid patients will be allowed to stay at home