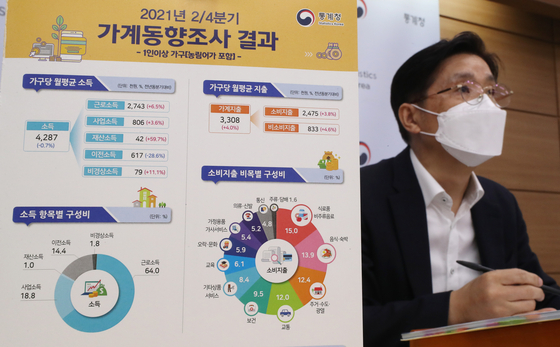 Household income fell 0.7 percent on year in the second quarter to 4.29 million won ($3,600), mainly as a result of the high level of government payments in the same period in 2020.

Finance Minister Hong Nam-ki stressed that the government spent a total of 14.3 trillion won on support payments to every Korean household in May 2020. The government covered 12 trillion won while the rest was funded by local governments.

Due to the smaller amount of government support, monthly income of Koreans with lower incomes fell while those with higher incomes rose.

Spending in the second quarter increased 4 percent to 3.3 million won a month on average.

Spending by higher earners and low earners fell, while those in the middle spent more.

Grocery spending, which is 15 percent of household spending, grew 2 percent.

Consumer prices in each of the last four months have been rising more than 2 percent on year.  Grocery prices have been growing in the double digits.

The government has been trying to help by increasing the supply of food.