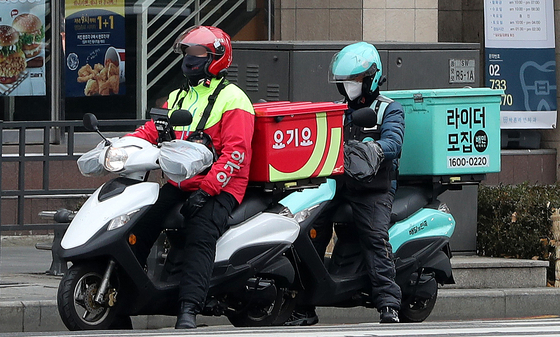 
Delayed food deliveries and damage to food on the way to the homes of customers will soon be cause for compensation claims.

The authorities have stripped the food delivery apps of their immunity.

Terms and conditions for the use of Baedal Minjok, commonly known as Baemin, and Yogiyo must be revised to “protect customers and restaurants,” the Fair Trade Commission (FTC) said Wednesday.

Baemin and Yogiyo dominate the food delivery market, with Baemin controlling 49.1 percent and Yogiyo 39.3 percent as of end of June 2020, according to the FTC.

Baemin’s terms and conditions specify that the company holds "no responsibility for any food damage," even if the damage occurs during delivery.

The FTC said the terms are "unfair" and has ordered them revised so that the delivery companies take responsibility for any damage that occurs during delivery.

Yogiyo rules state that restaurant owners have the full responsibility for delays in delivery, but the FTC said the delivery apps will be "responsible if the company or the delivery workers have caused the delays."

The FTC also said the food delivery apps must inform customers in advance when they intend to delete reviews left by the customers on the apps. Temporary removal will be allowed, but the companies must inform the writers before removing the comments permanently.

They will soon only be allowed to cancel the contracts when they have “reasonable and specific reasons,” according to the FTC. In the case when there are no acceptable reasons, they have to inform the restaurant owners in advance so that “they have enough time to address the problems and raise objections.” 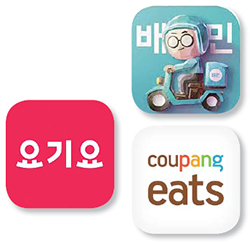 
Baemin and Yogiyo have the rest of the month to inform customers and restaurants about the revisions and will must apply them by the end of the September.

No mention was made about the precise level of compensation.

On Wednesday, the FTC said it is currently reviewing terms and conditions of Coupang Eats that specify its right to terminate contracts with restaurants.

Civic groups argue that the terms are unfair as they are not specific enough.

Under app’s terms and conditions, it can cancel contracts with restaurants with "products and services poorly rated by customers,” and restaurants that are “inadequate as sellers due to mounting complaints from customers.” Coupang Eats has full authority to make the decision.

“Terms should be specific enough so that restaurants can predict in advance which situations would give cause for cancellation, but the terms of Coupang Eats lack details,” said Park Seung-mee, a policy official from the Korea Franchisee Union, during a press briefing in June.

Coupang Eats has become the subject of withering criticism after a restaurant owner died following a dispute with a customer and a follow-up phone call with the delivery app.

On May 7, a customer ordered three pieces of fried shrimp from the restaurant using the Coupang Eats app and called the restaurant the next day demanding a refund, claiming that one of the shrimp was a “strange color" after being in the refrigerator overnight. The customer is reported to have verbally abused the owner of the restaurant by insulting her parents and left malicious comments on the app with a one-star rating out of five stars.