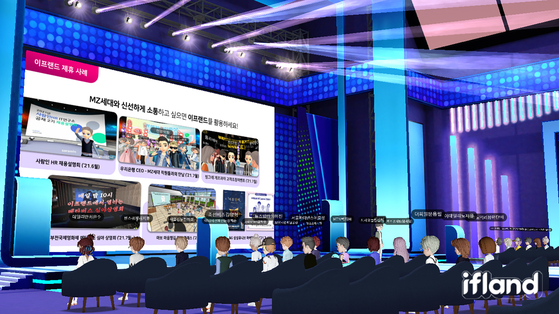 
SK Telecom became the first Korean company to hold a metaverse press conference on Thursday on its latest metaverse platform ifland, presenting the company's visions and goals to expand its services to provide a whole new virtual world for users.

The online press conference featured managers from SK Telecom who entered the virtual space using their own customized avatars. Reporters' avatars sat down on chairs prepared in the virtual hall, while managers took the stage and gave presentations.

A large-scale virtual screen displayed the speaker's actual digital presentation, which could be zoomed in on for those whose avatars were seated at the back, farther from the stage. Reporters could applaud in between presentations, and the managers' avatars took a bow after their speech.

The metaverse is a virtual space where people can guide avatars and interact with other avatars and with the computer-generated environments.

“The technology has advanced so much that we are holding a press conference in the metaverse,” said Yang Maeng-seog, head of SK Telecom's Metaverse Biz. Group. “We are planning to hold a variety of virtual events on ifland, such as fan meet-and-greets for K-pop stars, university festivals and even firework festivals.”

The firework festival, for instance, will allow users to enter a virtual outdoor park and watch actual pre-recorded videos of fireworks. SK Telecom signed a partnership agreement last year with Hanwha to show its famed annual firework festival through its online platforms. Details of this year's event, including how it will be streamed or presented, have not yet been decided.

The ifland app was released to the general public on July 14 as an upgrade to SK Telecom's JUMP Virtual Meetup app, looking to take on Naver's Zepeto which has currently cornered the metaverse market.

According to the company, ifland has seen double the amount of active users compared to JUMP Virtual Meetup, and they stay on the app for an average of five times longer than before. The company did not disclose exact numbers.

“We have been receiving hundreds of partnership offers since opening the app last month,” Yang said. “We’re still in the first month of our service, so it’s still a bit premature to talk about the size of our business. But we are aiming to expand our services beyond Korea and to the global audience.” 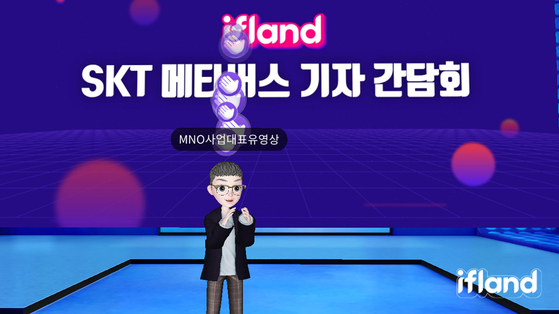 
SK Telecom will launch the service in 80 countries around the world. The app is currently available on both Android and iOS smartphones, but it plans to expand into computers and virtual reality devices such as the Oculus Quest models. The company said it is aiming to service new devices by the end of this year.

“We will first focus on providing communication tools for people in the short term to get users more used to the idea of a metaverse platform,” Yang said “But in the end, we dream of a metaverse world where people come in to create new content and carry out economic activities.”

To create such a metaverse, SK Telecom will first focus on recruiting people to join their pool of virtual influencers and content makers to attract more users. The virtual influencers, which the company has dubbed ifluencers, will be given the power to create new items that can be used within the app and sell them to other people to generate profit for themselves. This function is scheduled to be in place by the end of the year.

The item marketplace function resembles the existing functions at Naver Z's Zepeto — currently the frontrunner in the metaverse race in Korea and perhaps ifland's biggest rival. The online events, such as fan meet-and-greets and collaborations with companies, also resembles much of what Zepeto has been doing so far.

Ultimately, ifland aims to allow companies to sell their products and hold commercial events virtually. Consumers will be offered a diverse pool of entertainment, and a massive open world where people can make money will open for everyone to join in, said Yang.

"We believe that virtual influencers will become a major profession in the future where people generate fame and money in the metaverse world," Yang said. "The metaverse world will be a new world that replaces the real world. To make sure that everyone gets to take part in the new world, we promise to improve the accessibility of our service both in and outside of Korea."