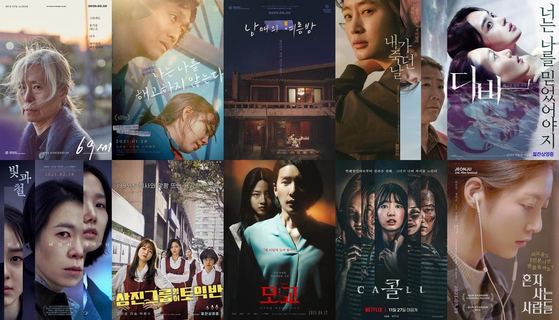 The posters of the 10 films selected by the Directors Guild of Korea for this year's 'Bechdel Choice 10.' [DGK]


The Directors Guild of Korea (DGK) announced a list of 10 films on Wednesday which surpassed the Bechdel test that measures appropriate representation of women in fiction.

Titled “Bechdel Choice 10,” the DGK implemented the three criteria of the Bechdel test, also known as the Bechdel-Wallace Test, created by American cartoonist Alison Bechdel which appeared in her comic strip “Dykes to Watch Out For” in 1985.

To pass the Bechdel test, a film must have at least two female characters that are named, they must talk to each other and the subject on the conversation cannot be male characters.

The DGK added four additional categories that fit the needs of contemporary standards to evaluate the films: At least one of the creators behind the scenes, such as the filmmaker, producer, screenwriter and the camera director has to be a woman, the film has to have a female protagonist, or at least have her feature as a main lead in the same proportion as the other male leads, the female characters should not be portrayed stereotypically and should not be averse to any social minorities.

“As seen from the fact that it was extremely difficult to find films that met all seven criteria, it is obvious that the Korean film industry still has a long way to go to fit the standards of gender equality that this era is demanding,” the judges said in a statement. “However, we were still encouraged to find films — both independent and commercial — that consistently attempt to create inspirational stories and not settle for gender stereotypes.”

“Bechdel Choice 10” is part of the DGK’s annual film event of “Bechdel Day 2021” which will be hosted on Sept. 4. The event was established last year to honor creators who promoted gender equality.