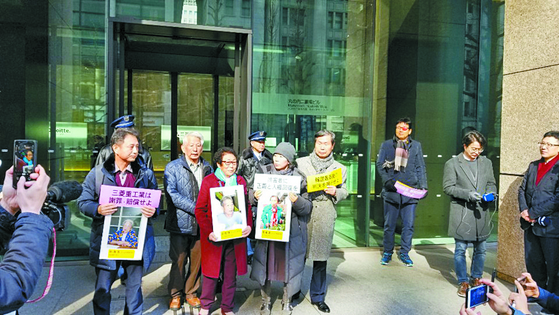 Yang Geum-deok, a survivor of wartime forced labor, third from left, and activists in support of her cause exit the Mitsubishi Heavy Industries headquarters in Marunouchi, Tokyo, on Jan. 17, 2020, after delivering a request to the Japanese company for compensation. [JOONGANG ILBO]


A Korean district court ordered the seizure of bonds owned by Japan's Mitsubishi Heavy Industries, bringing the victims of wartime forced labor a step closer to being compensated.

On Aug. 12, the Suwon District Court’s Anyang branch ordered the seizure of about 850 million won ($722,000) worth of bonds Mitsubishi owns in LS Mtron, a Korean industrial machinery manufacturer, according to Haemaru Law Firm, which represents the victims, Wednesday.

One surviving forced laborer and the relatives of three other deceased victims filed an application with the court earlier this month to seize the bonds after confirming business transactions between Mitsubishi and LS Mtron. This came after Mitsubishi refused to apologize or compensate the victims despite a landmark 2018 Korean top court decision siding with the forced labor victims.

LS Mtron will not be able to pay transaction proceeds to Mitsubishi as the court decision took effect Wednesday. This includes payments that the company owes Mitsubishi for the purchase of machine parts such as tractor engines.

On Oct. 30, 2018, the Supreme Court ordered Nippon Steel & Sumitomo Metal to compensate victims of forced labor during World War II. It made a similar ruling on Nov. 29, 2018, ordering Mitsubishi Heavy Industries to compensate a separate group of victims 80 to 150 million won each.

Korea’s top court acknowledged the illegality of Japan’s 1910-45 colonial rule and recognized that individuals' rights to compensation had not expired.

Both Nippon Steel and Mitsubishi have refused to comply with the Korean top court's decisions, forcing the victims into a drawn out legal process to seize the Japanese companies’ assets in Korea, without much success so far.

The Suwon court's decision opened a door for the compensation of the forced labor victims.

The value of the bonds ordered seized exceeds the 340 million won compensation to the four victims ordered by the Supreme Court, plus damages incurred for the delays in the payment and execution costs.

The compensation issue has spurred a diplomatic row and Japan ordered export restrictions on Korea in July 2019, impacting its semiconductor and display industries. Tokyo has also warned that bilateral relations would be hurt even more if Japanese companies’ assets in Korea were seized.

When asked about the Korean court decision on Mitsubishi, Japanese Chief Cabinet Secretary Katsunobu Kato said in a press briefing Thursday, “I will refrain from commenting on every move in Korea” but added that the 2018 Korean Supreme Court rulings were “clearly a violation of international law.”

Kato again warned that if Japanese companies assets were liquefied, “This will be a very serious situation for Korea-Japan relations” and “should be avoided.” He urged Seoul to come up with a “solution that is acceptable” to Tokyo as soon as possible.

A Blue House official told reporters Thursday, “The Korean government is in close consultation with the Japanese side while listening to various opinions from all walks of life in order to find various reasonable solutions while taking into consideration the realization of victims' rights and bilateral relations between Korea and Japan.”

Haemaru Law Firm said in a statement on behalf of the victims, “We request Mitsubishi to pay compensation according to the [Supreme Court] ruling and to acknowledge historical facts and apologize.”

It added, “If Mitsubishi continues to ignore the implementation of the ruling, we plan to collect the payments directly from LS Mtron,” in accordance to the latest court order.