The way the U.S. abandoned Afghanistan after spending trillions of dollars sends a sobering message to other parts of Asia facing potential security threats such as South Korea, Taiwan and even Japan.

So far, the Taiwanese are determined to safeguard their country by developing a solid base for a democratic, representative form of government, paying for their defense, hewing close to a pro-American line of security in the Pacific. Taiwanese are doing all this even within a whisker of the Chinese Leviathan.

Similarly with Japan. Its postwar economic endeavors, pro-American alliance, the Japanese people’s consensus that they stand at the forefront of Asian security in the face of regional hegemonic powers like China and Russia all have helped keep the conservative Liberal Democratic Party in power for seven long decades. Now Japan, having broken its unspoken taboo of keeping defense spending below 1 percent of GDP, has emerged as a formidable line of defense in the western Pacific.

The only problem spot is South Korea, for whose freedom the U.S. has invested so many dollars and lives. Despite the fact that North Korea has developed and acquired nuclear weapons, the government of President Moon Jae-in mouths empty slogans of peace and detente while undermining the U.S.-Korean alliance, cutting down annual military exercises, hinting that the U.S. should wink and accept the nukes as fait accompli.

North Koreans are executing their favorite power play in dealing with the United States and South Korea. It’s another version of the wedge in which they sow divisions between the U.S. and South Korea and between conservatives and liberals in the South. 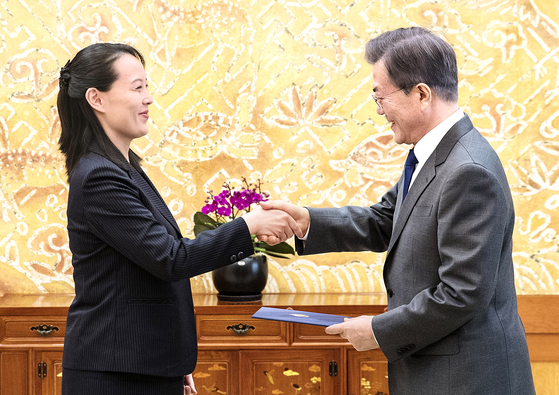 Kim Yo-jong, North Korean leader Kim Jong-un’s sister and vice director of the Workers’ Party, delivers her brother’s letter to President Moon Jae-in in a visit to the Blue House on the sidelines of the 2018 PyeongChang Winter Olympics in South Korea. [YONHAP]


The current gambit is the North’s demand that South Korea call off this month’s annual military exercises with U.S. troops. As it is, the war games are playing out on computers, and the warriors are chair-bound Americans and Koreans making sure they’re on the same wavelength in case holy hell does break out on the Korean peninsula.

The days when U.S. and South Korean troops trained in vast areas south of the demilitarized zone between the two Koreas while warplanes zoomed above and naval vessels fired from offshore are long gone. Donald Trump stopped all that after his summit with North Korea’s Kim Jong-un in Singapore in June 2018, when he suddenly called off that year’s war games without bothering to warn his own defense secretary.

A new crisis is slowly building with the North threatening to create trouble ahead of the election next year of a new South Korean president to succeed Moon, obsessed as he is with the notion of leaving a legacy as the leader who brought about reconciliation with the North. North Korean Army Gen. Kim Yong-chol, whose reputation as a tough guy goes back to his ordering the sinking of the South Korean naval vessel the Cheonan in 2010 with a loss of 46 men aboard, left no doubt he has something else in mind.

“We are keenly watching the military exercises,” he stated. “We will make the South feel how dangerously it is pushing itself closer to an enormous security crisis.”

Implicit in Kim Yong-chol’s message is that the North, caught in the grip of famine, has little to lose in war while the South will lose everything. His goal is to blackmail Seoul into stopping the exercises, weaken Seoul’s alliance with the United States, and break out of the debilitating sanctions regime.

With little to show after more than four years in office, Moon is vulnerable to such hard line posturing precisely because he has invested so much of his prestige and resources on achieving rapprochement with Kim. By saying little in response, Moon seems to be wavering, presumably anxious to save the fruits of goodwill created by letters he secretly exchanges with Kim.

The North’s threats are effective among members of the governing party in Korea’s National Assembly, dozens of whom signed a statement requesting a reduction of the joint exercises. If they had their way, they would cancel them.

Speculation now is that Moon is anxious to have Kim Jong-un accept his invitation to visit Seoul prior to the next presidential election in March in a triumphant show of success for his North Korean policy. Veteran analysts in Seoul believe Kim could accept such an invitation in light of the grave economic crisis he faces under the current sanctions, whose impact Kim himself has acknowledged. Food shortages, he has said, place his country “in tense condition.”

Were Kim to agree to visit Seoul, he would surely exact a high price for such a ground-breaking visit — not just more food aid but an end to all UN-imposed sanctions, which are killing his economy, plus an end to future military exercises with the United States, all in exchange for declaring an end to underground nuclear tests or tests of long-range missiles, neither of which he’s conducted since late 2017.

The progressive liberal Moon has always shown a soft spot for Kim, but opposition conservatives are determined to stop him from impressing this line on Washington or on domestic voters ahead of the election. They are convinced no bona fide deal is possible with Kim after all the failed denuclearization agreements over the years.

Conservatives want nothing short of denuclearization on verifiable conditions as do Washington and Tokyo. At home, South Korea is in a period of tense unrest over Moon’s dealings with the North, splitting the country between left and right. Mounting clashes between the two sides are a boon for Kim Jong-un. Koreans — notably the middle class — are developing a genuine concern for the future, now even more after the abrupt departure of the U.S. from Afghanistan.

As things stand, the North Koreans are so weak economically, so hard hit by Covid-19, that they’re in no shape to fight anyone, but not so weak as to be incapable of creating tensions along the demilitarized zone. Back in the mid-1990s, even a massive famine that decimated an estimated 3 million people did not stop their investing funds and manpower into producing nukes and the missiles to fire them at targets near and far.

Rising demands for stopping the exercises show the remarkable ease with which North Korea can bend Moon to its will.

Writing in Foreign Affairs, the former U.S. military commander in Korea, General Vincent Brooks, and the former Korean General Leem Ho-young, Brooks’ deputy with the Combined Forces Command in Seoul, stressed that Washington and Seoul must “work on cementing their own alliance” in order “to approach North Korea from a position of strength, denying Pyongyang the advantage of facing an incoherent alliance.” Troops, they wrote, need “access to the few training areas available for maneuvers and live ammunition usage, which are key to maintaining military readiness.”

Such thinly disguised warnings don’t seem to have much impact on Moon and his advisers. Nothing could be more disconcerting than the disconnect on critical matters. Since talking to Moon at the White House in May, President Joe Biden has not been noticeably interested in North Korea. Indeed, according to the Congressional Research Service, he may be considering “partial sanctions relief in exchange for partial steps toward denuclearization.”

One would like to assume sanctions relief would be predicated on Kim accepting verification, which he has adamantly refused to do. With Biden having been exposed as a weak leader by precipitously withdrawing American troops from Afghanistan, however, one can never be certain what he would do in a crisis.

In the wake of bitter recriminations over Afghanistan, Biden looks unlikely to muster the courage to do anything that could cause frisson with Moon over North Korea. He may want to wait out the turmoil in the South and see who comes out on top in next year’s presidential election, but differences over how to deal with Kim Jong-un are bound to cloud the outlook in uncertain days ahead on the whole North Korean issue.