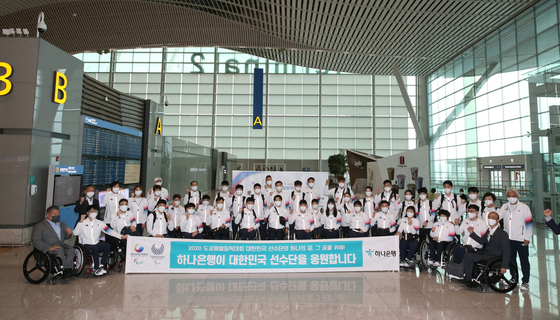 The first wave of Korean Paralympic athletes gets ready to depart for Tokyo at Incheon International Airport on Wednesday. [KOREA PARALYMPIC COMMITTEE]

The Korean athletes’ first participation was at the third Paralympics in Tel Aviv, Israel in 1968. Song Shin-nam won the first gold medal in the men’s wheelchair table tennis singles at the Heidelberg Paralympics in 1972. The best performance for Korea was a seventh-place finish at the 1988 Seoul Paralympic Games, with 40 gold, 35 silver and 19 bronze medals. Since then, Korea has established itself as a Paralympics powerhouse.

Despite the achievements, the Paralympics do not get as much attention as the Olympics. It was in 2008 at the Beijing Paralympics that the rewards and pension benefits for the medalists became the same as Olympic athletes. Broadcasters compete to cover the Olympic Games, but they do not show much interest in broadcasting the Paralympic Games. It was only a superficial saying that heroes are born at the Olympics and heroes compete at the Paralympics. The heroes receive little spotlight.

Who is the flag bearer for the Korean national team at the Paralympics opening ceremony on Aug. 24? Thirty-year-old Choi Ye-ji, a Boccia player, will be leading the athletes. Boccia is a ball sport using six red and blue balls in a 6-meter-by-12.5-meter court, attempting to get close to a white ball. Athletes with severe impairments such as cerebral palsy play the sport.

Korea is strong in Boccia at the Paralympics, as it is in archery iatthe Olympics. From the Seoul Olympics to Rio 2016, Korea has won eight consecutive gold medals.

Korea is sending 159 people, its biggest team ever, to Tokyo, including 86 athletes and 73 officials. The goal is to win four gold, nine silver and 21 bronze medals to rank within the top 20. The Korean Paralympic Committee is operating an online page during the Tokyo Paralympic Games. The torch of the Paralympics is getting ready to burn. It is time to listen to the stories of the heroes who overcame life-changing impairments.