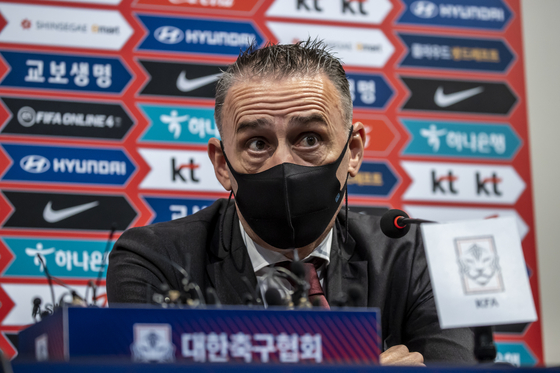 
Korean national football team head coach Paulo Bento will announce his squad on Monday for the third round of World Cup qualifiers set to begin on Sept. 2.

The Taeguk Warriors were drawn alongside Iran, the United Arab Emirates, Iraq, Syria and Lebanon in Group A for the third round of Asian qualifiers for the FIFA Qatar World Cup.

Korea has four of those games this year — against Iraq on Sept. 2, Lebanon on Sept. 7, Syria on Oct. 7 and the UAE on Nov. 11. The match against Iran will be played in March next year.

The top two teams from each group will qualify for the World Cup, while the two third-placed sides will square off for a place in the intercontinental play-offs.

Korea’s best are expected to be called up for the qualifiers, including those players based overseas. Captain Son Heung-min is likely to get the call, as are Bordeaux’s Hwang Ui-jo, Mainz’s Lee Jae-sung, Rubin Kazan’s Hwang In-beom and Fenerbahce’s Kim Min-jae.

Those players available for international duty will gather at the National Football Center on Aug. 26.