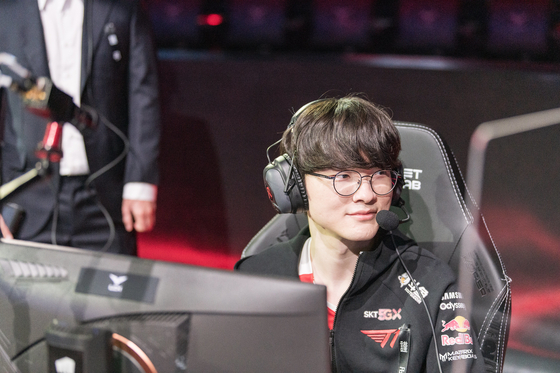 
T1 took down Liiv Sandbox in a convincing 3-0 sweep in the first round of the 2021 League of Legends Champions Korea Summer Split playoffs, on Thursday evening.

While LSB was paid due respect, fan and experts alike leaned in favor of T1 in the pre-match predictions. Despite T1's shocker against Hanwha Life Esports in the final match of the regular season, most viewers expected the boys in red to bounce back and recover their recent dominant form — and this turned out to be the case.

The first game saw star AD carry Park "Teddy" Jin-sung return to the stage for the first time since the first round of the summer split. Rumors of his comeback had been circulating for a few days, worrying some fans — not without good reason, considering how frequently T1 had suffered over the past two years at crucial moments from erratic changes to their starting lineup.

Teddy, however, quelled such doubts right away with an MVP performance on Ashe, securing first blood in the first minute of the game then taking over the map alongside Moon "Oner" Hyeon-joon's Viego.

Both teams opted to stick with their overall approach to the draft going into the second game, although LSB did make slight adjustments such as banning away the Ashe. The early game seemed to be off to a quiet start — but then Lee "Faker" Sang-hyeok's signature LeBlanc broke the balance by scoring a solo kill on Yu "FATE" Su-hyeok's Sett.

The solo kill turned out to be a harbinger of things to come. A few minutes later, T1 won in dominant fashion an early large-scale teamfight around the first Rift Herald, securing close to a 3k gold advantage. It looked as if T1 would be able to repeat their Game 1 blitz with Oner's Viego again at the helm, but this time, Liiv rallied around Park "Summit" Woo-tae's Gnar and put up a fierce resistance.

Through sheer grit and some great individual play, LSB managed to even the gold difference and drag out the game close to the 50-minute mark. In the end, however, T1 were still able to close by virtue of better concentration and team composition. MVP went to Faker.

With the score at 2-0, LSB chose to mix things up and dramatically alter their strategies, first-picking Viego away from Oner, shifting Summit away from Gnar, and handing FATE a playmaking pick in Sylas. T1 responded to the Viego takeaway with Nidalee and Varus, then rounded off their draft with another Faker classic, Orianna.

The early game did not feature many kills — first blood came at the 14-minute mark — but was full of tense standoffs and ear-grazing bullets. Not much changed going into the mid game, either, with FATE grabbing some key kills all around the map but T1 still staying slightly ahead in gold.

A rather anticlimactic ending came at the 36-minute mark, however, when Summit and FATE made highly questionable individual plays that backfired spectacularly and led to a massive teamfight defeat. With most of LSB down, T1 was able to make a beeline for their Nexus and end the series. Kim "Canna" Chang-dong, who kept Summit in check for most of the game, was awarded MVP.

"I think we'll need to improve how we snowball our leads," Teddy shared in the post-match press conference. "Our first game today was clean, but the second and third [were not]."

Head coach Son "Stardust" Seok-hee chose not to divulge any tactical details pertaining to why Teddy returned to the starting lineup, but said he had faith that the veteran would perform well immediately despite his recent lack of playtime.

Teddy, in turn, affirmed that he didn't have much trouble maintaining his form through solo queue during his time away. Saying he was happy to have returned to the stage, he vowed to perform even better in the next match.

Shortly after the match, DWG KIA, who won the right to select their semifinal opponent by placing first in the regular season, chose to face off against Nongshim RedForce. T1 will thus meet Gen.G Esports.

The second round of the LCK playoffs will take place this weekend: DWG KIA vs. Nongshim on Saturday, and Gen.G vs. T1 on Sunday. Both matches will start at 5 p.m.