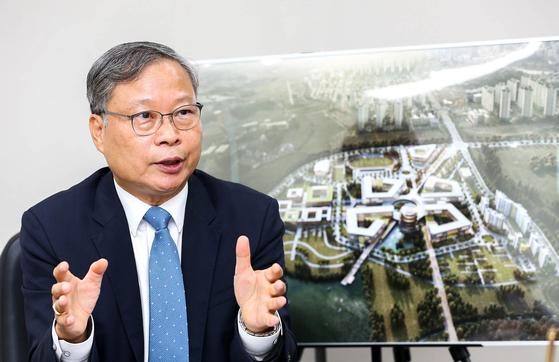 NAJU, South Jeolla-Yoon Eui-joon, president of the Korea Institute of Energy Technology (KENTECH), expressed confidence that the new energy university can develop an electric vehicle battery that can last a month on a single charge or a mostly hydrogen energy source.

"The era of digging in the ground and burning fossil fuel is coming to an end," Yoon said during an interview with the JoongAng Ilbo on Aug. 12. "Twenty years from now, the competitiveness of a country will be measured by its abilities in the energy sector."

KENTECH is an institution founded with the aim of being the world's only university specializing in energy.

The campus, located in Bitgaram Innovation City in Naju city, South Jeolla, will be opening in March next year.

"KENTECH will be focused on specialized education and research on future energy," Yoon said.

A total of 828.9 billion won ($700 million) will be invested by 2025 not only in the establishment of the university but also in its management.

"Like other countries, such as the U.S., those in Europe and Japan, Korea has pledged carbon neutrality by 2050," Yoon said. "However, on the current path, we may not be able to achieve carbon neutrality."

He said while zero emissions in terms of greenhouse gas is a problem that mankind must solve, the possibility of Korea having talent that could develop new energy technologies with the current education and research system is low.

With admissions starting now, the first class will graduate in 2025.

The school's president is planning to run the school as an institution that is small but strong, with 1,000 students and 100 professors focused on research and development but also on start-ups.

The education and research will be focused on five areas--energy artificial intelligence (AI), energy materials and device, grid modernization, hydrogen energy and environment and climate technology.

"We plan to establish the five specialized research centers based on the key fields," Yoon said. "Having scholars in specialized energy fields is not easy even at any other universities in the world."

"The 80 or so professors will be focused on research in the five energy fields," the school president said. "This is something that is difficult in universities that handle a wide variety of subjects."

He said Korea's level in energy-related technologies is considered to be two to four years behind the level of advanced economies. As such, the emphasis has been placed on the first students, who will become the future leaders in Korea and the world.

The school's first early admissions round will start on Sept. 10. Already KENTECH has hired 50 professors that will teach the freshman during its first school year starting March.

The heads of research in the five key fields have already been designated.

"KENTECH is aiming to become one of the top 10 universities in the world in energy by 2050," Yoon said. "Selecting the institution's first freshman is important."

Yoon said the institution will be fostering national-level energy talent through the school's innovative curriculum, which hasn't been attempted at any other academic institutions.

The president stressed that as the last piece of the puzzle in completing a global university specializing in energy is the talent, the school will introduce an admissions system that is unique and hasn't been tried at any other school. 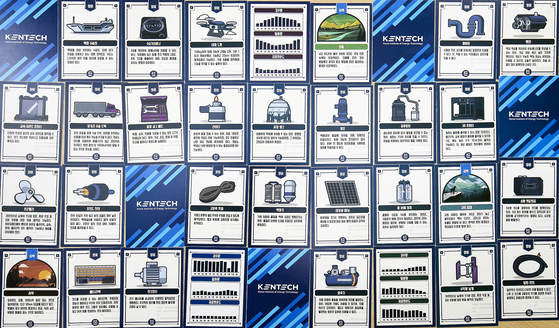 The mission cards that will be used during the admission interview testing the student's creativity. [CHANG JEONG-PIL]


One of the unique ways of evaluating early admission applicants is the so-called "creativity interview."

In the first 15 minutes of the interview, the applicants will have the chance to introduce themselves including high school records as well as their interests in science and math and why they applied specifically to KENTECH.

Next, the applicants will undergo a "Mission KENTECH Package" interview that will last for 55 minutes.

It tests the creativity of the applicants while using data and records of different areas, including ravines, deep oceans, tropic forests, wetlands, deserts and prairies as well as various equipment, such as drones, storage vessels and superconductive wires.

The goal is to see how the student uses his or her creativity in solving the problem that they face.

"It is an interview that emphasizes imagination and creativity rather than knowledge," said Kim Hee-tae, the KENTECH professor who developed the creativity interview.

The students will be given 30 minutes to solve the problem and 25 minutes to explain their thinking.

"There are no answers to the questions that we present," Yoon said. "As students have to find the answer on their own through creative storytelling, those who have focused on memorizing will have a difficult time."

Yoon said the KENTECH campus will be built for experiments.

The school will have classrooms with no blackboards, deviating from past education systems where knowledge is passed on one-sided by the professors teaching in class.

Yoon said the emphasis is to have the students and even the professors learn beyond the textbooks.

The university president said while the number of students and faculty is relatively small, the school programs will emphasize frequent interaction between the students and the professors, including exchange of ideas and debates.

Yoon said only through such communications will more experimental creativity emerge.

The school president said university space should be structured in a way that the students being educated achieve their learning from more than just jotting down what is said by their professors.

"One could easily forget under an education system where students only write down the theories and are then tested," Yoon said. "But information obtained through experience is different."

Instead of students simply attending classes, they will be given a type of task for each semester in which they will be able to test their theories.

If a group of professors and students in a project develop a solar energy fuel cell, they will have the opportunity to field test their research by installing the fuel cell on streetlamps on the campus.

In some areas of study, instead of a single professor teaching there will be two.

"One example will be the class in measuring greenhouse gas emissions," Yoon said. "Usually, greenhouse gas measurement is in the environment engineering department. But if the plant in which the theory is applied is a semiconductor manufacturing plant, a related professor will join in the testing."

He said the school will aggressively support professors so that they can focus on working on their papers and research that will lead to quality papers and patents of key technologies.

"Usually when professors are evaluated on their performance, it was determined by the number of papers the professor wrote," Yoon said. "But in our case, our focus will be on providing support so that the professors can immerse themselves in quality papers or research as well as on patents."

A school beyond its region

The school president said while KENTECH is based in Naju, South Jeolla, its aim is to become a global institution.

He cited KAIST as an example.

"KAIST, which is celebrating its 50th anniversary this year, is based in Daejeon," Yoon said. "But that doesn't mean the school is an institution that is only for those in South Chungcheong."

He said when KAIST was first founded it faced a number of controversies, including the size of public funds being invested into it and negative views over creating another institution much like what KENTECH has gone through.

"However, after 50 years, the contribution of KAIST, as a specialized university in science and engineering, has made to the industrialization and economic development of Korea has become an undeniable fact," Yoon said.

"KENTECH much like KAIST is an institution that will educate and train talent in future energy technologies at the national level," Yoon said. "As the students today will become the cornerstones of society 20 years later at a time when the importance of energy experts will be significant, we hope many students across the country will choose KENTECH."

Yoon Eui-joon, the first president of Korea Institute of Energy Technology (KENTECH) majored in metallurgical engineering at Seoul National University (SNU) and earned his PhD in electronic material at the Massachusetts Institute of Technology (MIT).

Not only was he the president of SNU’s Advanced Institutes of Convergence Technology, but he also served as the head of SNU’s R&DB Foundation, a research cooperation between the school and private companies.