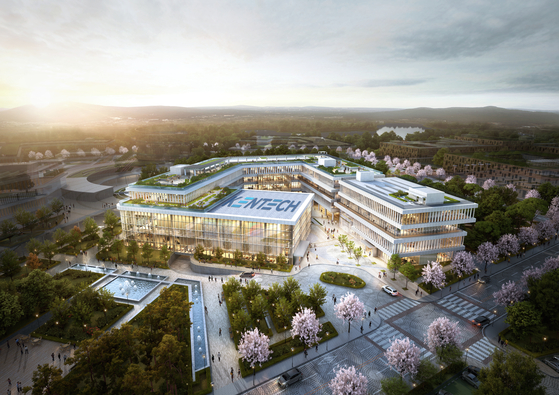 Computer rendered image of the Korea Institute of Energy Technology (KENTECH) in Naju, South Jeolla. Campus construction started in June, and the first phase of four phases will be finished before the first school year starts in March 2022. [KENTECH]

On June 1, a groundbreaking ceremony was held for the Korea Institute of Energy Technology (KENTECH), the nation’s first energy exclusive university, in Naju, South Jeolla.

Establishing a university dedicated to energy technology was among the 100 projects included in the Moon Jae-in government’s five-year plan, announced in July 2017.

In a campaign promise, Moon said he would create an energy university funded by Korea Electric Power Corp. (Kepco) in South Jeolla.

Kepco’s headquarters is in Naju, South Jeolla, where the school’s campus is being built.

The university project is being pursued to advance the policy of upgrading Korea’s energy technology, especially in clean energy, and to bolster the regional economies.

Aiming to start its first school year in March 2022, the National Assembly approved a special bill on the establishment of KENTECH on March 24.

This bill created the legal foundation for the institution, including government funding. It also mandated the independent management of the school for the recruiting of scholars and in terms of admissions.

Some 828.9 billion won is expected to be invested in KENTECH by 2025. Of the investment, 75 percent will be covered by Kepco, while the rest will be funded by both the central and local governments.

It will be developed in four phases.

The first phase is to complete key facilities of the school before its first school year in March 2022.

The main building is on a 5,224 square-meter area. The building will be four stories high with one story below ground.

The building will not only have a multipurpose hall but also lecture rooms, study cafes and libraries.

The school will borrow 3,300 square-meters of land that’s part of the Kepco’s R&D center on new energy technology for its graduate school’s research lab and lecture rooms.

The school will have 400 undergraduates, 100 for each class starting with freshman, and 600 graduate students.

While admissions are to start next month, 90 percent will be early admissions.

According to KENTECH, the school’s curriculum is focused on “problem-based learning.”

As such, the campus is designed to strengthen communities, stimulate interaction and advance online learning.

It will also be designed so that students and researchers can get quality breaks, a campus that is more pedestrian friendly and connected to the surrounding community.

KENTECH has adopted a residential college system, similar to those at Oxford and Cambridge.

Students will be able to not only focus on the field they are majoring in but also on wide variety of other subjects and hobbies.

All of the buildings will be operated with efficient energy management while powered by renewable energy.

The Moon administration has been strongly pushing for the transition from fossil fuels to clean energy since it took office in 2017.

It first announced increasing the renewable energy contribution to 20 percent from 6 percent today by 2030. Moon then pledged carbon neutrality by 2050.

The global energy market has emerged as one of the most important fields, with the International Energy Agency projecting the market to grow into a $17 trillion industry by 2030.

According to the Korea Institute of S&T Evaluation and Planning, Korea is four to five years behind leading advanced countries in energy technology.