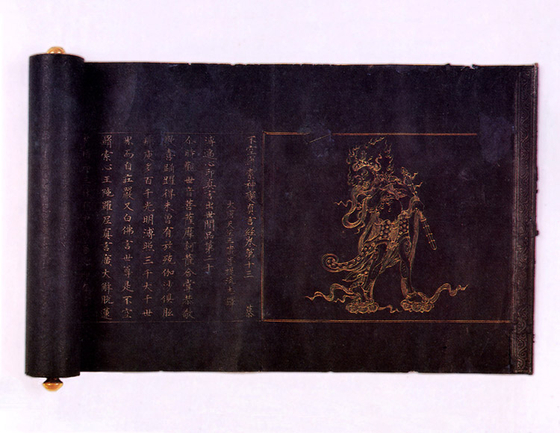 This book is hand-written in silver ink on dark blue paper and made in the form of a scroll.

This is Book No. 13 of a set consisting of 30 books. It is recovered from Japan. The character “Mo,” the first letter in the "Book of Thousand Characters," written at the end of the title on the book cover implies that the books are numbered according to the order of the characters as they appear in the Book of Thousand Characters. It also tells that this is part of the Tripitaka.

At the beginning of the book is a golden painting of a heavenly guard who protects the scriptures. The text of the scripture is written in silver. The remark at the end of the book says that this scripture was made under the guidance of the king himself in 1275 (the first year of King Chungnyeol of Goryeo).

The remark on the back cover reveals that the writings in the text are those from a Great Buddhist Monk by the name of Samjung Anche. Although many types of scriptures made during the Goryeo Period have been passed down to today, this book draws attention because it is the oldest one made during that period.

The painting of the heavenly guard found at the beginning, and the remark at the end that tells story behind its production, certainly increases its value. The calligraphy further raises the quality of this Buddhist treasure.